CNN Publishes a Lengthy, Positive Profile of an Atheist Family

You know, it’s not often you see a positive story about an atheist…

But this long feature by CNN’s Daniel Burke is just a wonderful look at a family of atheists from North Carolina. 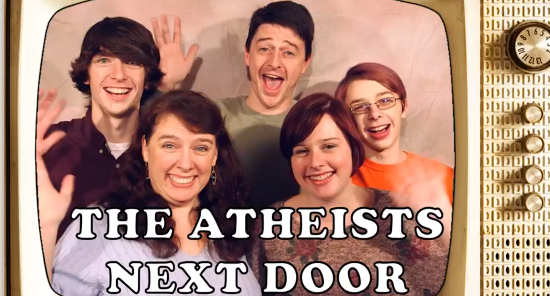 Charlotte and Harry Shaughnessy were both Catholic when they got married in 1991, but their faith began to fade more than a decade later.

Harry wondered whether telling a priest you’re sorry and reciting a few Our Fathers could really wipe a sinner’s soul clean. Even Hitler? Charles Manson?

If Harry had talked to a priest, he might have been told that confession doesn’t work quite that way. It requires true penitence, a commitment to changing your sinful ways — and in the end, only God decides who to forgive.

But Harry didn’t consult a priest, and the more he and Charlotte talked, the more they confessed their conflicts with the church. They disagreed with its opposition to same-sex marriage. They didn’t understand the doctrine of original sin, which condemns every infant for Adam and Eve’s appetite. The Bible stories, like Noah’s Ark, sounded to them like fairy tales.

Eventually, Harry and Charlotte reached the thorniest question: Did they belong in the Catholic Church?

It wasn’t easy for Harry to tell his parents about his decision to leave the Church:

“Mom, Dad,” he said, “I don’t think I believe in the Catholic Church anymore.”

As Harry recalls it, his father looked at him and asked: But if you don’t go to church, who is going to raise your children to be moral, ethical people?

Harry was stunned, and says he probably deflected the question with a wiseass remark. But when he returned home and told Charlotte, she blew up. Years later, it still angers her.

“Just because we stopped walking through a church door doesn’t mean we’ve stopped being moral people! The church hasn’t been raising their grandchildren, we have!”

It’s an uplifting story about a great family. I had the good fortune of staying with the Shaughnessys during a trip to North Carolina last year and the piece really captures their spirit — not to mention the local atheist community’s energy.

These mainstream media pieces reflecting so positively on the atheist community are rare, so relish this one.

The story coincides with a special on atheists that CNN will be airing this Tuesday night.

March 21, 2015
How Meaningful Can a Relationship with God Be If There's a Threat Involved?
Next Post