A bill introduced by California State Assembly Member Lorena S. Gonzalez a couple of months ago, called the “Double Pay on the Holiday Act of 2015,” just passed through the Labor committee. And it’s a roundabout way to promote Christianity.

In short, the bill would mandate that employers pay their workers at least “twice the employee’s regular rate of pay” on certain holidays. 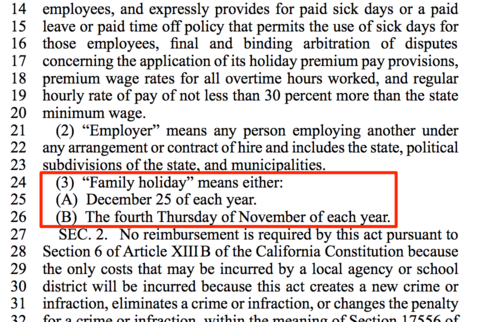 You could make a compelling case that those are the two biggest national holidays, so the legislation makes sense, but Loren Kaye, the President of the California Foundation for Commerce and Education, offers this food for thought:

You may argue that the primary purpose of the double pay on holidays legislation is secular (although choosing a religious holiday for that purpose makes even that contention suspect). But its effect is to endorse a Christian holiday, and it compels “adherents and nonadherents” alike to honor this endorsement. As much as a “major number of constituents” — or even a majority of the Legislature — may wish to effect this infringement on religious liberty, it clearly falls outside the bounds of the First Amendment.

Because Thanksgiving is included in the bill, it may provide some shield to the “Christian endorsement” argument (hell, that may be why it’s there in the first place). But if we’re interested in giving people higher pay on certain holidays, then why not include the religious holidays of other groups, too? It’s not like employees will automatically get paid double during Ramadan, or Hanukkah, or Pi Day. By singling out a Christian holiday, it sends the message that it’s the only religious holiday that matters. There’s a potential legal problem in the making if the bill passes.

March 21, 2015
Conrad Black Rails Against the "Shabby, Shallow World of the Militant Atheist"
Next Post

March 21, 2015 Human Trafficking is the Consequence of a "Godless Agenda," Says Tony Perkins
Browse Our Archives
What Are Your Thoughts?leave a comment