VIDEO: Afghani Mob Kicks and Stomps Woman To Death For Allegedly Burning a Copy of the Qur’an March 20, 2015 Terry Firma

VIDEO: Afghani Mob Kicks and Stomps Woman To Death For Allegedly Burning a Copy of the Qur’an

By my reckoning, there are more than a billion printed copies of the Qur’an on this Earth. Saudi Arabia alone gives away 30 million new Qur’ans every year. Islam’s founding text is also online in thousands of places. The Qur’an, the most common book after the Bible, is more indestructible than ever.

But soil or burn one copy of it and you could pay with your life, as one woman in Kabul, the Afghan capital, found out yesterday.

Accusers who alleged that Farkhunda, 27, burned the Islamic holy book, proceeded to kick, beat, and stomp her to death, all caught in a video that even in the age of Daesh is remarkable for its savagery.

I can’t usually watch real-life violent footage, but in this case the victim has been entirely pixelated so that her battered face and her broken, bloodied body are never seen. That allows us to focus more on the horrid brutality of the attackers: their physical strength, their visceral hatred, their body language expressing excitement, their eagerness to submit to violent impulses with seeming impunity — and, inevitably, their gleeful shouts of Allahu Akbar.

An angry mob in the center of the Afghan capital, Kabul, has killed a woman and set her body alight for allegedly burning a copy of the Koran. Police and witnesses say the killing took place near the Shah-e Doh Shamshira shrine on March 19. 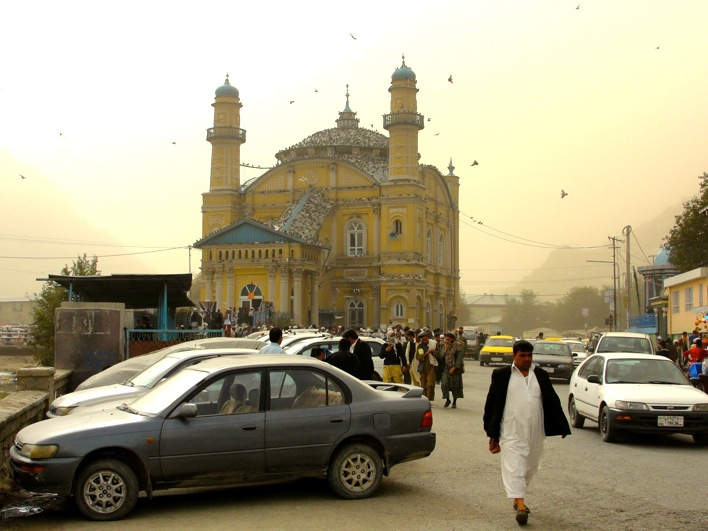 “We were watching this incident. She burned the Koran,” one eyewitness told RFE/RL’s Radio Free Afghanistan. “A lot of people gathered around the spot,” he added. “They burned her.”

The head of Kabul’s criminal police, General Farid Afzali, told the AFP news agency that the woman’s body was then thrown into the Kabul River.

A security official quoted the family of the victim as telling investigators that she had been suffering from mental illness for many years,

From what I’ve observed, we’d be hard-pressed to say that these are Islamist radicals. The attackers, who wear mostly modern street clothes including khakis and leather jackets, don’t look like Taliban or al-Qaeda. Just a random mob of possibly “moderate” Muslims, then, if that’s not too “gross” or “racist.”

Four men are in custody over Farkhunda’s murder.

P.S.: Meanwhile, in Pakistan, a crowd of enraged Christians beat and burned two men to death who they — wrongly, it seems — suspected of involvement in suicide bombings at two churches. According to a witness,

[H]eavily outnumbered police had no choice but to look on as the men were murdered. …

Pakistan’s Dawn News has identified the lynched men as Babar Noman, a garment worker who moved to Lahore in search of factory work, and a glass cutter called Naeem. His brother, Muhammad Saleem, said he had nothing to do with the bombings and was seized as he locked up his motorcycle nearby shortly after the blasts. Members of the crowd reportedly shouted to the mob to spare him because he was innocent,

…but to no avail.

(Photo by Michal Hvorecky via Wikipedia)

March 20, 2015
Congressman Introduces Legislation to Prevent "So Help Me God" from Becoming Optional Part of Military Oaths
Next Post

March 20, 2015 Sharia Spreads: It's Now the Law in Part of Malaysia
Browse Our Archives
What Are Your Thoughts?leave a comment