Sharia Spreads: It’s Now the Law in Part of Malaysia

Islamic countries that have embraced sharia include Sudan, Afghanistan, Iran, Iraq, Pakistan, Saudi Arabia, Yemen, and Nigeria. Last year, Brunei became the first Southeast Asian country to join that wretched club, and now neighboring Malaysia has done the same. More precisely, the state of Kelantan has, despite the fact that sharia is incompatible with the country’s constitution.

Among the punishments: limb amputations for theft; crucifixion for deadly robberies; 40 to 80 lashes for consuming any quantity of alcohol; and, of course, good old-fashioned stoning for adultery. The law also prescribes death for apostasy (remember that when Muslims quote Al-Baqara 256 from the Qur’an and try to tell you that “there is no compunction” in their religion). 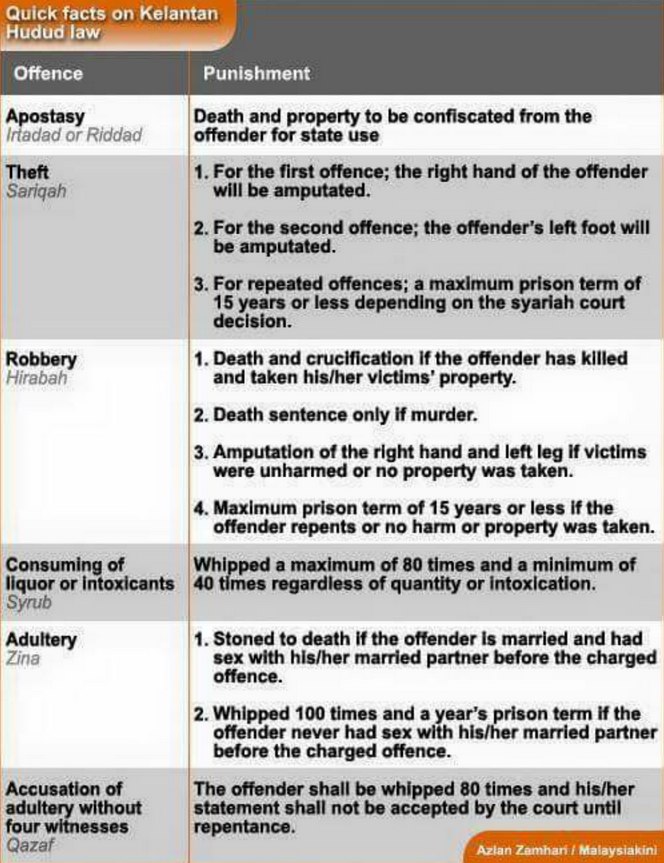 A Malaysian Islamist party successfully passed measures Thursday that could see harsh Islamic criminal punishments carried out in the state it governs. Critics have sounded the alarm over the push to implement strict Shariah law in the northeastern state of Kelantan, arguing that though it would nominally apply only to Muslims, it could threaten the religious co-existence enshrined in Malaysia’s national constitution.

The Shariah amendments, known as “hudud,” were passed unanimously by Kelantan’s Islamist-controlled state legislature and would amend the state’s penal code to allow for punishments like caning and stoning for crimes ranging from alcohol consumption to apostasy, according to the Anadolu news agency. Kelantan’s population is 95 percent Muslim, and the Pan-Malaysian Islamic Party (PAS), which controls the state government, has long been pushing to strengthen and implement a hudud law from 1993 that was never enforced because it conflicted with the country’s federal constitution.

But wasn’t Malaysia universally considered to be a modern, moderate Islamic country? How times change:

Malaysia has a longtime reputation for practicing a relatively moderate brand of Islam, but more conservative attitudes have gained ground in recent years, with various Islamist political factions, including PAS, jockeying for support from religious voters.

The new law in Kelantan is still subject to approval from the federal parliament, in which the Pan-Malaysian Islamic Party is an opposition party… so maybe this isn’t as terrible as it looks. In fact, the move could still backfire on the fundies, as it has generated concern and strife among their coalition partners.

March 20, 2015
VIDEO: Afghani Mob Kicks and Stomps Woman To Death For Allegedly Burning a Copy of the Qur'an
Next Post

March 20, 2015 20 Years Ago Today, the Aum Shinrikyo Cult Attacked the Tokyo Subway System With Nerve Gas, Killing 12
Browse Our Archives
What Are Your Thoughts?leave a comment