A group that’s based on Buddhism and yoga sounds like it would be about as dangerous as the sixth-grade chess team at Pleasant Valley Elementary. And yet:

On this day, March 20, in 1995, 12 people were killed and thousands were sickened in Tokyo when members of [Shoko] Asahara’s cult, Aum Shinrikyo, released sarin during the Monday-morning rush hour in one of the world’s most crowded subway systems. Members of the cult used the tips of their umbrellas to puncture plastic bags filled with liquid sarin on five crowded cars before hurrying off at subway stops and leaving their fellow riders trapped with the toxic gas.

It was an unusual move for a religious movement based on Buddhist and Hindu principles and centered on the practice of yoga, but Asahara was an unusual spiritual leader. TIME described him, in a 1995 story about the gas attack, as a long-haired, bushy-bearded bully, “usually pictured wearing satiny pajamas,” who claimed he could levitate and promised to give his followers superhuman powers. 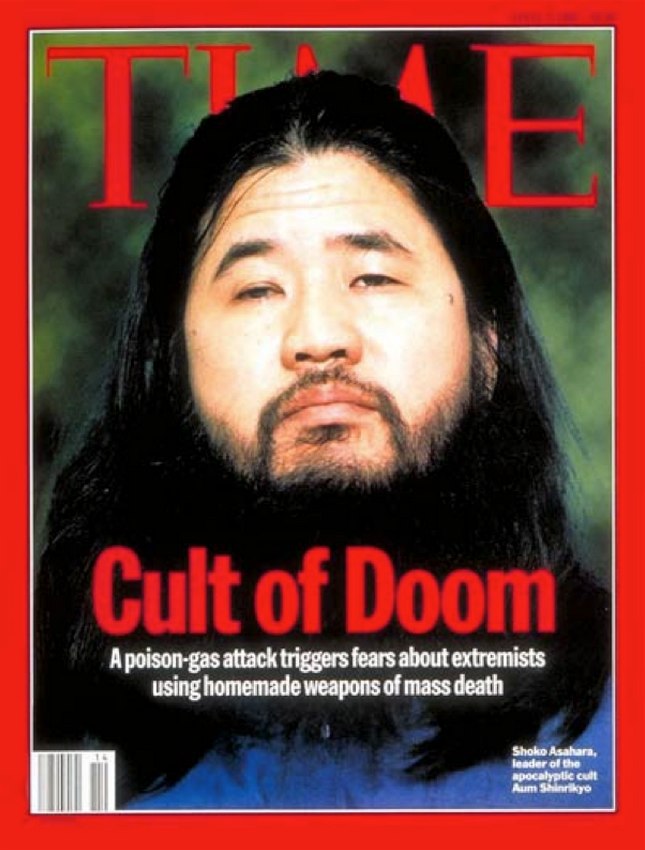 The current TIME piece doesn’t mention Christianity at all, which is very odd indeed; it’s no secret that Aum Shinrikyo’s bizarre belief system

… incorporates Asahara’s facets of Christianity with idiosyncratic interpretations of yoga and the writings of Nostradamus. In 1992, Asahara … declared himself “Christ,” Japan’s only fully enlightened master, and identified with the “Lamb of God.” His purported mission was to take upon himself the sins of the world, and he claimed he could transfer to his followers spiritual power and ultimately take away their sins and bad deeds.

The group had been in the throes of madness and violence years before the subway massacre. I admittedly don’t know how to define “normal” when it comes to spiritual beliefs and practices, but this isn’t it:

Initiation rituals often involved the use of hallucinogens, such as LSD. Religious practices often involved extremely ascetic practices claimed to be “yoga.” These included everything from renunciants being hung upside down to being given shock therapy.

Critics of Aum ended up on a hit list:

In October 1989, the group’s negotiations with Tsutsumi Sakamoto, an anti-cult lawyer threatening a lawsuit against them which could potentially bankrupt the group, failed. In the same month, Sakamoto recorded an interview for a talk show on the Japanese TV station TBS. The network then had the interview secretly shown to the group without notifying Sakamoto, intentionally breaking protection of sources. The group then pressured TBS to cancel the broadcast. The following month Sakamoto, his wife and his child went missing from their home in Yokohama. The police were unable to resolve the case at the time, although some of his colleagues publicly voiced their suspicions of the group. It was not until 1995 that they were known to have been murdered and their bodies dumped by cult members.

The cult is known to have considered assassinations of several individuals critical of the cult, such as the heads of Buddhist sects Soka Gakkai and the Institute for Research in Human Happiness. After cartoonist Yoshinori Kobayashi and TV commentator Dave Spector began satirizing the cult, they were included on Aum’s assassination list. It attempted to assassinate Kobayashi in 1993.

Then the nerve gas attacks began. One of the surprises I got when delving back into the story was that the gassing of the Tokyo subway didn’t stand alone. I’d forgotten that Aum Shinrikyo (the term means “Religion of Truth”) had done trial runs, starting with the nerve-agent killing of a flock of sheep in Australia, and then progressing to this:

On the night of 27 June 1994, the cult carried out a chemical weapons attack against civilians when they released sarin in the central Japanese city of Matsumoto, Nagano. This Matsumoto incident killed eight and harmed 200 more. However, police investigations focused only on an innocent local resident, Yoshiyuki Kouno, and failed to implicate the cult at the time.

After the Tokyo subway attack, in which 12 died and hundreds were injured, police searched Aum’s headquarters, and found

… explosives, chemical weapons, and biological warfare agents, such as anthrax and Ebola cultures, and a Russian Mil Mi-17 military helicopter. … There were stockpiles of chemicals that could be used for producing enough sarin to kill four million people.

Shoko Asahara has been on death row since his 2004 trial resulted in a conviction. Thirteen of his followers also received death sentences.

Aum Shinrikyo still exists today, but under a different name, Aleph. An Aum splinter group is called Hikari no Wa (“the Circle of Light”). Between 1,000 and 1,500 Japanese are members of Aum’s successors. Once bitten, twice shy, Japanese authorities are said to be keeping a close eye on followers’ activities.

March 20, 2015
Sharia Spreads: It's Now the Law in Part of Malaysia
Next Post

March 20, 2015 Christians Have Destroyed Almost All the Mosques In the Central African Republic; an American Fan Cheers Them On
"She's been openly critical of Trump."
Cynthia Ex-American Atheists President: I Don’t Love ..."
"Far out, man!!"
She of Penultimate Pulchritude Orange County (CA) School Board Twists ..."
"Sad news."
Soundstage Ed Brayton Died Earlier Today
"Absolute positions matter, but so does relative position and direction.As a Canadian, if a politician ..."
Cynthia Ex-American Atheists President: I Don’t Love ..."
Browse Our Archives
What Are Your Thoughts?leave a comment