No, Oklahoma Isn’t About To Forbid Atheists from Marrying March 18, 2015 Terry Firma

No, Oklahoma Isn’t About To Forbid Atheists from Marrying

After the U.S. Supreme Court upheld the overturning of Oklahoma’s same-sex marriage ban in October, social conservatives in that state have been looking for new loopholes. And you have to hand it to Oklahoma Rep. Todd Russ: this one is at least moderately creative.

Introduced by Rep. Todd Russ (R-Cordell), House Bill 1125 would end state-issued marriage licenses, while providing marriage certificates as an alternative. It passed through the Oklahoma state House by a 67-24 margin on March 10.

The bill would replace all references to marriages “licenses” in state law with “certificates.” The legislation would not invalidate any marriage licenses issued prior to the bill being passed.

So what does that do?

First let’s look at what it doesn’t do. Many media (the Independent, Metro, the Voice, Reddit, Progressive Secular Humanist) have reported that H.B. 1125 will prevent atheists from getting married.

But I read the bill, and that’s really not what you find when you get to the relevant part of it, section 7, which says

The preacher, minister, priest, rabbi, or ecclesiastical dignitary who is a resident of this state shall have filed, in the office of the court clerk of the county in which he or she resides, a copy of the credentials or authority from his or her church or synagogue authorizing him or her to solemnize marriages.

The word judge has been left out of all the clauses, so that providing marriage certificates is now the province of members of the clergy; secular authorities on the bench have been cut from that process. That sounds bad, but it doesn’t mean that Oklahomans wishing to tie the knot now have to rely on the blessing of a cleric. That’s what section 7E makes clear:

Marriages not contracted by a formal ceremony pursuant to subsection A of this section may be acknowledged by filing an affidavit of common law marriage with the court clerk.

Granted, that’s a hurdle, but not an onerous one, and it doesn’t mean that a marriage between non-believers, or between a non-believer and a believer, is about to be outlawed in the Sooner State. For starters, any ordained, progressive cleric can still sign off on such a union, and that includes secular people who’ve gotten their ordainment document online, from the Universal Life Church, Godswill Ministries, or the Church of the Latter-Day Dude. It takes no time at all and the certificate is either free or dirt cheap. Here’s mine: 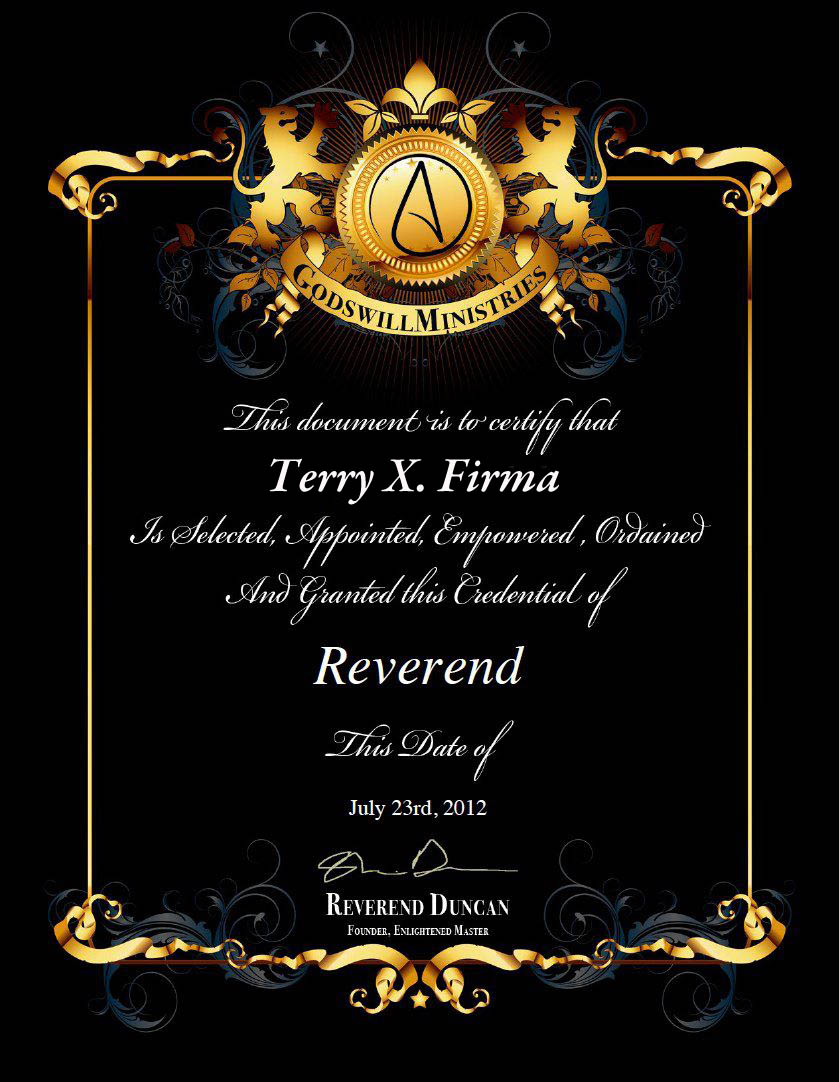 In addition, even without getting a “fake” minister involved, godless partners can still get married, and make it official, by filing a simple affidavit.

H.B. 1125 appears to have two goals (other than, perhaps, sticking it to gay people):

First, it would render void the edicts of federal judges that have overturned state laws defining marriage. The founding generation never envisioned unelected judges issuing ex cathedra pronouncements regarding the definition of social institutions like marriage and the Constitution delegates the federal judiciary no authority to meddle in the issue. Marriage is a realm clearly left to the state and the people…

Second, the bill would get the state government out of defining marriage entirely as well, ending the squabble between factions that seek to harness the power of the state, thereby taking the burden off government officials who may be torn between what is legally required of them and their religious convictions.

The intent or motives behind this bill are a moot point. By removing the state from the equation, no one can force another to accept their marriage, nor can they force another to reject that person’s own beliefs regarding an institution older than government.

Though the bill may have been born from anti-gay pique, there’s actually a solid case to be made for keeping government out of marriage. Stephanie Coontz, a history professor and the author of Marriage, a History: How Love Conquered Marriage, does so in this New York Times piece.

(Top image via Shutterstock. A correction was made regarding the U.S. Supreme Court’s role in the state’s marriage equality issue.)

March 18, 2015 For Inadvertently "Denigrating" Buddha, Three Men Each Get Two Years in a Burmese Prison
"The Leopards Eating People's Faces party has recruiters on campus!"
democommiescrazierbrother Christian School Expels 8-Year-Old Girl Who ..."
"Probably the only thing that could prevent that from eventually happening, other than Poland ceasing ..."
CriticalDragon1177 Despite Massive Protests, Poland’s Near-Total Abortion ..."
"Kunneman probably thinks 'The Flintstones' is a documentary if he believes there ever was a ..."
David Cromie Preacher: Trump Will Still Win! We ..."
"You know, I don't think I've ever seen a dog challenge the authority of his ..."
cdbunch Christian Mommy Blogger: Hit Your Kids ..."
Browse Our Archives
What Are Your Thoughts?leave a comment