Ted Cruz Thinks NASA Spending on Earth Sciences Should Decrease; NASA Administrator Tells Him How Wrong He Is

On Thursday, Senator Ted Cruz (R-TX), noted science denier and chairman of the Senate Subcommittee on Space, Science and Competitiveness, voiced his concerns with NASA spending allocation during a committee meeting. Of particular concern to the senator was an increase in Earth sciences spending. Presenting a chart that showed an increase from the 2009 budget to the 2016 budget of 41% in Earth science spending, coupled with a decrease over the same period in space exploration of 7.6%, Cruz (below) argued that space exploration is the core function of NASA. Current spending was not honoring that mission, he felt.

NASA Administrator Charles Bolden didn’t see things quite the same way. He began by noting that NASA has been actively seeking cost reduction for launches, and has managed to drive the costs down. But studying Earth is a critical function of NASA he argued, that “has enabled us to understand our planet far better than we ever did before.”

He also emphasized that he was not committing to Cruz’s numbers, as there is more to space exploration than the chart might accurately encapsulate. 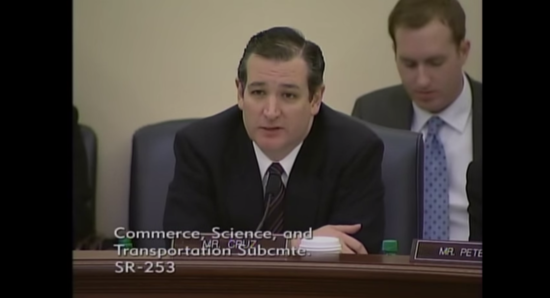 So, as Senator [Ben] Nelson said, it is absolutely critical that we understand Earth’s environment. Because this is the only place we have to live.

Not that it will make much difference to a seasoned science denier Cruz to hear yet another expert declare that it’s important to keep an eye on the place we live. But his expression after Bolden responded to his political posturing is pretty priceless. 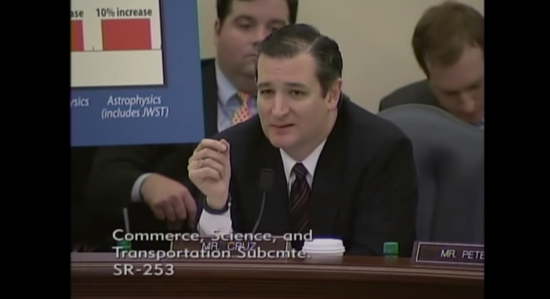 March 17, 2015
I'm a Presbyterian Minister Who Doesn't Believe in God
Next Post

March 17, 2015 It's Worth Taking a Full Minute to Learn How to Add 9 and 6: A Response to the "Common Core" Critics
Browse Our Archives
What Are Your Thoughts?leave a comment