Snake-Handling Pastor Andrew Hamblin Is Arrested for Terrorizing His Family With a Gun March 17, 2015 Terry Firma

A year and a half ago, Tennessee preacher David Andrew Hamblin, who handles venomous snakes as part of his faith, got in trouble with the Tennessee Wildlife Resources Agency. TWRA agents raided his Tabernacle Church of God and took the dozens of illegal snakes they found, including rattlesnakes and copperheads, to the Knoxville Zoo. Hamblin was cited for possession of “wildlife inherently dangerous to humans,” but a grand jury, deferring to his “religious rights,” declined to indict him.

Now Hamblin, 23, who appeared on the National Geographic show Snake Salvation, is getting more law-enforcement and media attention — but not over serpents.

Sheriff’s deputies arrested him after he made threatening gestures at his estranged wife and his mother-in-law, waving a gun around. He then fired two bullets at his in-laws’ house. Though a baby was inside, and the couple’s other children watched the scene unfold outside, no one was hurt. 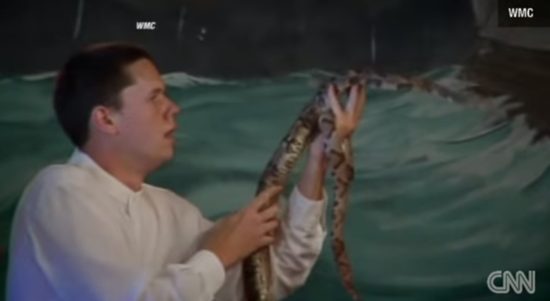 After the incident, the children’s grandmother said:

‘They don’t understand what’s going on at all. All I know is they kept asking as the police was there, ‘Why did daddy do this?‘” … “What Andrew needs to do is grow up, get a life, and be a dad.”

Investigators recovered a bullet that was fired into the residence. Deputies said the bullet traveled through three walls and came to a rest in a bedroom closet.

Hamblin has been charged with aggravated assault and six counts of felony reckless endangerment. The judge set his bail at $200,000.

We featured the snake-loving pastor on this site twice before. Something tells me we’ll hear from him again, and not because he won a Humanitarian of the Year award.

March 17, 2015 Schocker: Rep. Aaron Schock Resigns In Expenses Scandal
Browse Our Archives
What Are Your Thoughts?leave a comment