Rick Santorum Wants the Bible Back in Public Schools (Not That Anyone Removed It in the First Place) March 17, 2015 Hemant Mehta

Over the weekend, ever-hopeful presidential candidate Rick Santorum told a conservative audience at Liberty Counsel’s The Awakening conference that the Supreme Court could be ignored; if they wanted Bibles in public schools, dammit, they could have them! 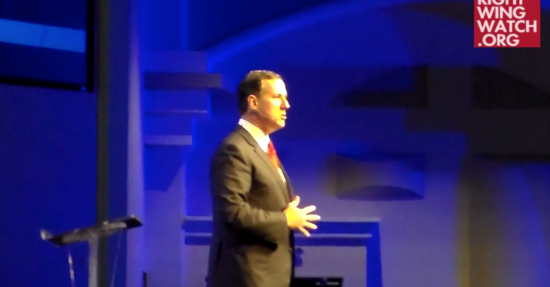 We are on a crossroads in American history, a crossroads that looks like we are heading down in a direction that, let’s be honest, no civilization has ever been able to recover from…

You say, “Well, we can’t get it back in.” Yes we can. Yes we can! How much are you willing to sacrifice?…

As usual, Santorum is just muddying up the situation.

Bibles are legal in public schools. They always have been — and church/state separation advocates will always defend that right.

What’s not allowed (and what the Supreme Court ruled against) is mandatory Bible-readings in those schools. No teacher or administrator can lead students in prayer or recite Bible verses over the intercom during the school day. That’s it.

What Santorum wants is direct proselytization. Forget those students who don’t believe in his God, or those who believe in no God at all. They just need to sit down and shut up.

March 17, 2015
A Free Online Course About Religious Conflicts
Next Post

March 17, 2015 Arabic Billboard Goes Up in Memphis to Promote Atheist Conference
"Joe Smith wasn't just a conman, he was a pervert as well. His religion was ..."
Satanic Donut Update: Canadian Court Rules Against Pastafarian ..."
"I know what the issue is. Your link address ends in /. Every time I ..."
NOGODZ20 Update: Canadian Court Rules Against Pastafarian ..."
"Sorry but are you refusing to answer this very reasonable question?"
blasphemous_kansan Citing “Moral Failure,” Christian Apologist Sye ..."
"Well done! I felt like Sye himself had shown up for a moment."
Chris Jones Citing “Moral Failure,” Christian Apologist Sye ..."
Browse Our Archives
What Are Your Thoughts?leave a comment