Creationist Ken Ham: Asteroids Will Never Kill Off Our Species Because Jesus Will Save Us First March 15, 2015 Hemant Mehta

Creationist Ken Ham: Asteroids Will Never Kill Off Our Species Because Jesus Will Save Us First

It is entirely possible — though not very likely anytime soon — that another asteroid could strike Earth and destroy our species. (It wouldn’t be the first time one devastates the planet.) 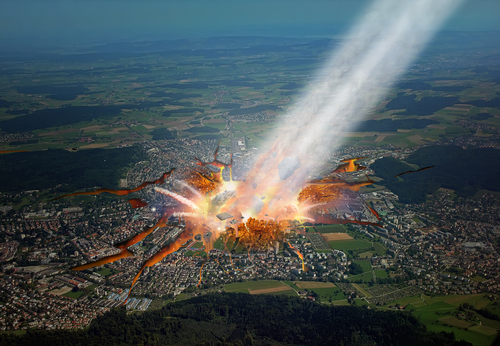 Not because he has any scientific reasons, of course, but because the Bible tells us exactly how the story of our species ends:

According to God’s Word, the universe is not here as the result of naturalistic processes. God created the universe and has imposed order on it. The universe is not strictly governed by unfeeling natural laws. God upholds and sustains the universe that He has made… And we don’t need to worry that an asteroid will obliterate life. The Bible has already told us how things will end — with judgment from God when Jesus Christ returns to Earth…

You know, at least when Ken Ham dismisses evolution, he goes through some bullshit argument about how Creationists just interpret scientific facts in different ways.

He’s not even offering bad science anymore. He’s done away with science altogether. Let’s forget everything we know about astronomy, he suggests, because the Bible offers an alternative ending.

You know what’s even scarier? Ham didn’t even write this article himself. He needed help from his “research team”:

A research team that apparently throws science textbooks out the window during work hours.