We learned the other day that Australian teenager Jake Bilardi joined ISIS and committed a suicide attack. What could have caused him to do such a thing? Well, he answered that question on his website:

The blogger writes that it was his reading on the wars in Afghanistan and Iraq, and abuses committed by occupying forces, “that gave birth to my disdain for the United States and its allies, including Australia. It was also the start of my respect for the mujahideen that would only grow to develop into a love of Islam and ultimately bring me here to the Islamic State.”

Conservative journalist Miranda Divine thinks she knows the *real* reason, though. She suggests that Bilardi didn’t really understand why he joined ISIS: 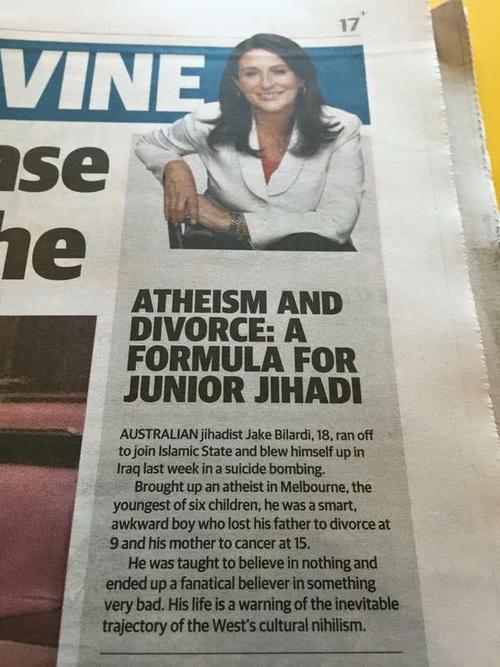 Brought up an atheist in Melbourne, the youngest of six children, he was a smart, awkward boy who lost his father to divorce at 9 and his mother to cancer at 15.

He was taught to believe in nothing and ended up a fanatical believer in something very bad. His life is a warning of the inevitable trajectory of the West’s cultural nihilism.

So, you see? He became a Muslim extremist in large part because he was raised to think religious beliefs are fairy tales.

But what else do you expect from someone who thinks ignorance and bullshit are a formula for journalism?

By the way, Divine responded to the backlash she received for her article with this tweet: 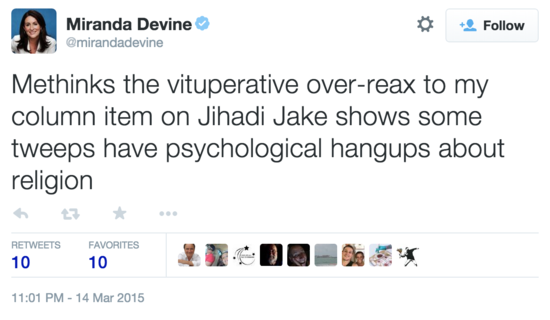 Yeah… because our “psychological hangups about religion” are the problem, not the wildly off-base speculation that’s the crux of her article.

March 15, 2015 Florida Church That Offers "Sexiest Ladies," Nude Body Painting, and Twerking Is No Longer Tax-Exempt
Browse Our Archives
What Are Your Thoughts?leave a comment