“Moderate” Muslim Asim Qureshi Dodges Every Tough Question in British TV Interview: “I Am Not a Theologian” March 14, 2015 Terry Firma

“Moderate” Muslim Asim Qureshi Dodges Every Tough Question in British TV Interview: “I Am Not a Theologian”

It’s rare to see a BBC interviewer apply pressure to a seemingly middle-of-the-road Muslim guest. Sure: firebrands like Anjem Choudary are routinely peppered with critical questions, but Muslims who present themselves as moderates are treated much more deferentially and quickly held up as exemplars of peace (sometimes in violation of the BBC’s own guidelines).

Interlocutor Andrew Neil, in the exchange below with Asim Qureshi, breaks that mold.

Qureshi (pictured below) is the research director for CAGE, a purported human-rights organization for U.K. Muslims. He talks most reasonably of young Muslims’ “disenfranchisement” and the “cycles of violence” they get caught up in, to the point where you think you that this is a man with whom you could possibly break bread. 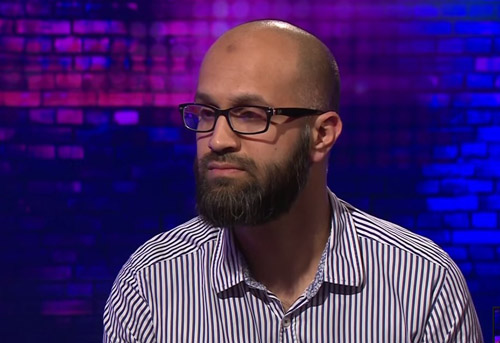 But doubts linger, and when you scratch the surface, those doubts are not unjustified. Qureshi has come out in passionate support of Chechnyan Muslim suicide bombers. In 2006, he spoke at an Hizb ut-Tahrir rally in London, defending violent jihad. CAGE, in conjunction with Amnesty International, defended the likes of Mohammed Emwazi against what they claimed was undue scrutiny by British anti-terrorism forces. Emwazi, described by Qureshi as “beautiful” and “extremely gentle,” soon became ISIS beheader Jihadi John.

The West should take the blame for Emwazi’s transformation, Qureshi thinks, because its governments treat innocent Muslims with unwarranted fear and suspicion, all but driving them into the arms of extremists.

Neil, who for years headed the Sunday Times, won’t have it, and holds Qureshi’s feet to the fire with a series of questions that his guest won’t answer except to repeat, like a mantra, that he is “not a theologian.”

I transcribed it for your amusement, starting from 10:59:

Andrew Neil: Your spiritual guide and mentor is Haitham al-Haddad… He believes the following: That female genital mutilation is not only acceptable, it is probably obligatory; that you should not question a man’s right to hit his wife; that non-Muslims prisoners can be taken as slaves; that Jews are descendants of pigs; that death by stoning is OK for adultery; and that homosexuality is a crime against humanity. Have you been guided to believe that too?

Asim Qureshi: I have never been… I have never believed any of those things… I am not a theologian… I have absolutely no idea what you’re talking about in relation to that.

You’ve said that under the proper sharia law process, that you would support the death penalty, correct?

… It’s interesting that you talk about that, because one of the things that actually came out of that that interview that I did with Julian Assange was a lot of criticism by scholars who said to me, ‘Why are you talking about issues that you know nothing about?’ I am not a theologian… I am not a theologian at all.

You don’t have to be a theologian to have a view on the death penalty. And it implied that under proper sharia law process, you would support death by stoning. Would you?

I do a lot of work against the death penalty. What I’m about is due process of law, OK, and that is what, the point that I was trying to make with that answer, was to talk about due process. That’s a very very important thing as far as we’re concerned.

… But after we’ve had due process, under a sharia law system, would you support stoning?

As far as I’m concerned, sharia law isn’t practiced anywhere in the world. You have to give me an example of where sharia law is being practiced correctly.

That’s a weasel answer, isn’t it.

It’s not a weasel answer.

It’s a simple question. If you had due process under sharia law, would you support stoning for adultery?

What I’m trying to find out is whether you are putting up a moderate front, and behind it hangs a jihadist agenda. That’s what I’ve been asking you, but you won’t answer my questions.

What we’re saying is that you cannot simply conflate isues of theology and religion with violence on the streets of London, which is exactly what you’re trying to do.

And Neil concludes, not unreasonably:

I think most people would regard stoning for adultery as not an issue of theology, but a matter of civilization.

Qureshi’s non-answers indicate he’s a man with a lot to hide. Sam Harris calls his performance “theocracy with a human face,” and adds

Qureshi is clearly afraid to misrepresent his faith, lest he blaspheme and break trust with all the religious maniacs standing at his back. In the end, he can’t even pretend to have values remotely commensurate with our own. All he can muster is the lamest of dodges: “I’m not a theologian.”

If what Qureshi presents is the reality of moderate, Western Islam, you can keep it.