Afghani Feminist in Metal Body Suit Is Driven Off the Streets of Kabul and Forced Into Hiding March 14, 2015 Terry Firma

This piece of declarative performance art would be brave enough on the streets of any European capital. In Kabul, it’s downright dangerous, as Kubra Khademi found out.

An Afghan artist has been forced into hiding after receiving death threats for dressing in a metal suit featuring exaggerated breasts and buttocks,

… a custom-made outfit intended to drive home her assertion that “this is all that men see of women.” 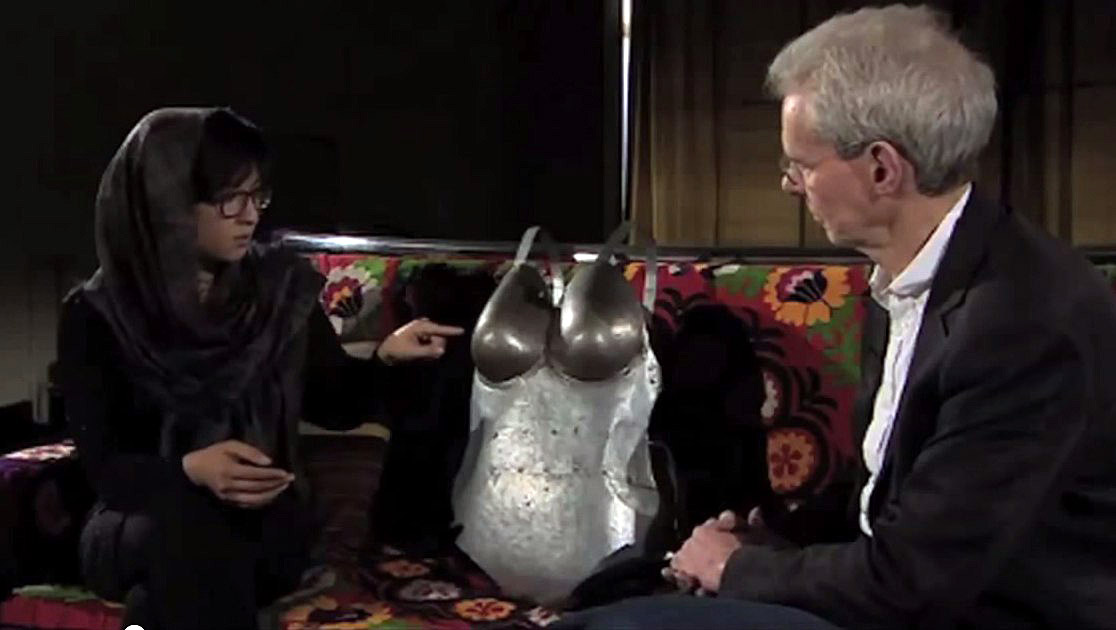 Kubra Khademi wore the unusual armor in a performance on the streets of Kabul to highlight the problems of sexual harassment faced by women.

She had hoped to make a walk lasting for 10 minutes, but in the event was forced back into her car by an angry mob of men after only eight minutes. The men threw things, and even children were shouting at her.

She said the men were yelling: “That whore. What is she doing? Is she a foreigner? Who the hell is she?”

The audacious act reminded me of a sort of inverse Afghani version of Femen. I love the artistry and originality that went into making the suit of armor.

The concept came to Khademi at a painfully early age.

The idea of the armor was inspired by her own experiences of sexual harassment when she was only five years old. … “What I remember of that day is only one sentence I said at that moment: ‘I wish my underwear was made of iron.'”

She is now at an undisclosed location, saying she’s been deluged with phone and email messages from Islamic fundamentalists threatening to kill her.

March 14, 2015
Naughty Schoolchildren Told to Lie Face Down on the Floor While Teacher Phones God
Next Post

March 14, 2015Charisma Writer Claims That the Christian Left is Responsible for Declining Religiosity
"Jesus created eternal torment for those who don't bend knee to him. That includes not ..."
NOGODZ20 Christian Nationalist (and Former WV Official) ..."
"Everyone in the theater cheered after that thrashing"
Timothy Weston Scott Lively: I Asked God to ..."
"Preordained event can't happen until these conditions are met."Omnipotent" God needs people's help to get ..."
Barry Evans Pastor: Christians Can “Prepare the Way” ..."
"Wow. This wasn't even a matter of raising taxes. The bill was to allow Idaho ..."
MuttsRule ID Lawmaker Rejects Child Education Bill ..."
Browse Our Archives
What Are Your Thoughts?leave a comment