A Letter to the Muslim Action Forum Regarding Blasphemy in the U.K. March 14, 2015 Hemant Mehta

A Letter to the Muslim Action Forum Regarding Blasphemy in the U.K.

This is a guest post by Caleb Powell. Caleb blogs for the Karachi based Express Tribune. He co-authored the book/film I Think You’re Totally Wrong: A Quarrel, published by Knopf and premiering this spring at Vancouver’s DOXA Documentary Film Festival. He also writes at Arguments Worth Having. 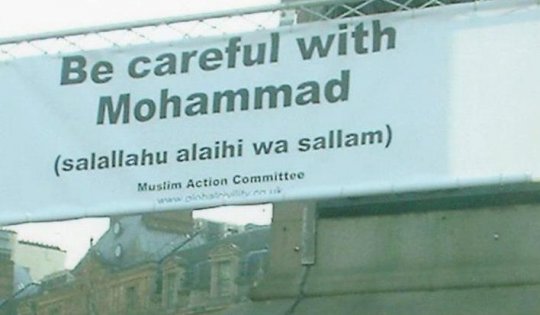 The fallout from the Charlie Hebdo massacre in Paris has led to a debate between free speech and censorship. In the United Kingdom, the Muslim Action Forum, funding “Be careful with Mohammad” billboards (seen above), recently issued a press release asking that an upcoming May, 2015 vote include a measure to make certain types of speech a “culpable offense.”

So I wrote them this letter:

Empathy demands compassion for the other. Without empathy we are sociopaths. Your campaign to criminalize what offends you comes across, in the context of Salman Taseer (murdered in Pakistan), Avijit Roy (murdered in Bangladesh), and the well known case of Raif Badawi in Saudi Arabia, as lacking in empathy.

In your press release, you write:

MAF intends to launch a series of legal challenges in the English Court system to establish that such depictions of our Holy Prophet peace be upon Him is the worst kind of ‘Hate Crime’ that can be perpetrated on the 3 million Muslims in the UK and 1.7 billion Muslims worldwide.

You proceed to request that “malicious… images” and “language against revered personalities of all religions,” including Islamophobia, be made a “culpable offense.”
Let’s examine the context. Salman Taseer was murdered by Mumtaz Qadri because Qadri was offended by Taseeer’s campaign to ban blasphemy laws in Pakistan. Therefore you stand with the murderer Qadri and groups like Daesh who also think blasphemy, including insulting the Prophet Mohammad, should be a “culpable offense.”

You also stand with the ten percent of Muslims who, in this BBC poll, supported the attacks against Charlie Hebdo.

The vast majority of Muslims prefer to live in mutual tolerance. To do so we cannot equivocate to the significant minority of Muslims who are religious chauvinists and bigots — not only those who support the ideology of Daesh and Boko Haram, but any person who supports violence in the name of defending their religion from “offense.” These religious chauvinists do more to create an atmosphere of Islamophobia, anti-Muslim bigotry, and hatred than any cartoonists or writer.

You consider blasphemy the “worst kind of ‘Hate Crime’” citing “1.7 billion” Muslims worldwide, yet how many Muslims do you speak for? Those who kill (less than 1%), those who support blasphemy laws that call for death (according to Pew, 20%), or the majority who are secure in their faith and do not wish to ban speech?

Here are two Muslims you do not speak for:

Farouk A. Peru, who wrote about apostates at AltMuslim:

To me, as long as they continue their earthly journeys positively and find fulfillment and happiness, then as a Muslim, I bid them peace.

And Shahed Amanullah, at The Islamic Monthly, who wrote:

[Censorship, in the West] can backfire. It is more likely that the majority would find the Quran to be hate speech worthy of banning than it would be for a minority (i.e. Muslims) to persuade the majority to ban anti-Muslim speech.

Amanullah and Peru and most Muslims would rather live for their faith than perpetually feel offended that there are people in the world who choose not to follow Islam, or wish to leave Islam, or criticize Islam, or satirize Islam. The number of atheists and non-religious people worldwide is over 1.5 billion — and growing. In the future, there will undoubtedly be more Muslims, Christians, and atheists. Which means criticism of Islam is growing, not receding, and thousands of ex-Muslims are organizing and speaking out. For peace, we all must live together. To live in the West and support free speech you must learn to turn the other cheek if you feel insulted. There is no other way.

(Image via the National Secular Society)