Pastor Creflo Dollar Wants $65 Million from His Followers So He Can Buy a Plane March 13, 2015 Hemant Mehta

Pastor Creflo Dollar (his real name) has a net worth of $27 million. He owns a million-dollar home in Atlanta and a 2.5-million-dollar apartment in Manhattan. He drives a Rolls-Royce and travels via a private jet.

But it’s not enough. His latest get-rich-quick scheme is to ask donors for enough money to purchase a $65 million plane. (For Jesus.) 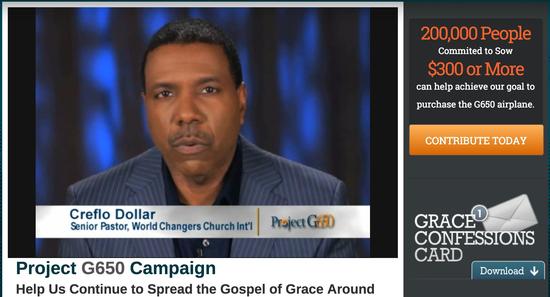 We are asking members, partners, and supporters of this ministry to assist in the undertaking of an initiative called Project G650. The mission of Project G650 is to acquire a Gulfstream G650 airplane so that Pastors Creflo and Taffi and World Changers Church International can continue to blanket the globe with the Gospel of grace. We are believing for 200,000 people to give contributions of 300 US dollars or more to turn this dream into a reality — and allow us to retire the aircraft that served us well for many years.

Even the Christian Post can’t figure out how much he’s raised:

The Christian Post reached out to World Changers Church International Thursday for comment on how much of the $65 million has been raised so far but this reporter was repeatedly directed to a customer service line which went unanswered.

Just in case you have any doubts as to how loyal his followers are, remember: They backed him up even after he was arrested for beating his daughter.

I don’t get why Empire revolves around a music mogul. They should just follow this guy around. He’s giving huckster Benny Hinn a run for his money.

March 13, 2015
New $50,000 Journalism Prize Will Be Named After Christopher Hitchens
Next Post

March 13, 2015 New Survey Suggests Americans with No Religious Affiliation May Soon Outnumber Any Single Religious Group
Browse Our Archives
What Are Your Thoughts?leave a comment