In ostensibly free European countries, you can get in a lot of trouble for the wrong kind of humor — not just (deadly) trouble from jihadists “avenging” their prophet, but trouble meted out by government agencies and police officers.

For instance, in the Netherlands, in 2008, the home office of cartoonist Gregorius Nekschot, a poison-pen critic of Islam,

… was raided by a team of ten police officers who had been dispatched by the Openbaar Ministerie, the federal Dutch DA’s office that works in conjunction with the Netherlands Justice Department. The cops confiscated Nekschot’s computer, his sketchbooks, and other materials, then took him to a detention facility where he spent 30 hours in a concrete cell before being released without charges — but after he had been made to promise to remove eight cartoons from his website. 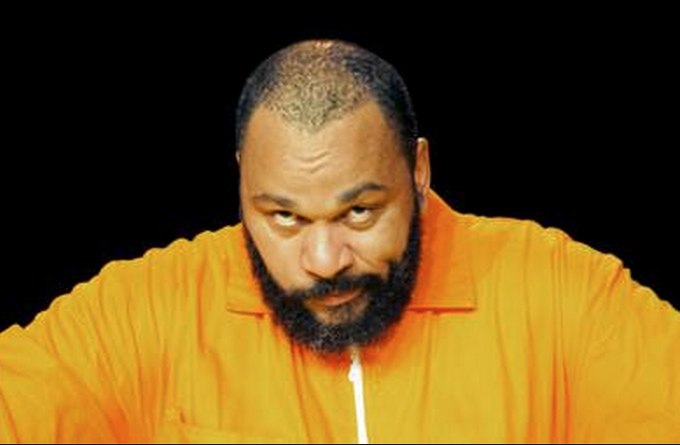 In January of this year, a week after the massacre at Charlie Hebdo, the French comedian Dieudonné M’bala M’bala (above), whose humor dances on the edge of anti-Semitism and sometimes well over it, was arrested on suspicion of

… “incitement of terrorism,” for appearing to offer a [written Facebook] gesture of solidarity with Amedy Coulibaly, the Islamist gunman who murdered four hostages in a kosher grocery store in Paris last Friday, apparently in concert with the terrorists who carried out the massacre at Charlie Hebdo’s offices two days earlier.

Now it’s the turn of a French cartoonist who goes by the name of Zeon. I just learned that one day last week, at 7 a.m., four police officers of the ominously named Brigade de Répression de la Délinquance aux Personnes (BRDP)

… woke the cartoonist to take him before the judge [at] the High Court … of Paris [link added, TF]. A complaint appears to have been filed by the BNVCA (National Bureau of Vigilance against Anti-Semitism).

The complaint focuses on these political drawings: 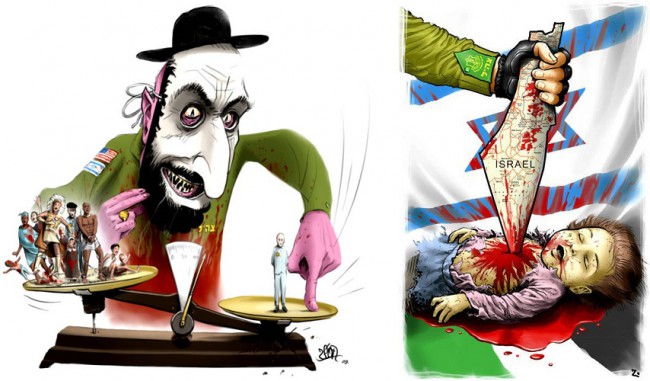 The judge has indicted the cartoonist [for] incitement to racial, religious hatred, by speech, writing, picture or means of electronic communication. Zeon refused to answer [any] questions. He was set free in late morning.

The Charlie Hebdo cartoons — though often crude and insensitive — didn’t break the law, and it would be hypocritical of the French prosecutors and bien pensants to treat Zeon’s work any differently.

The cartoon with the scale, which Zeon drew in 2009, had been the subject of a legal complaint before, but on that occasion the judge ruled that the statute of limitations had run out. It’s not clear to me why the new complaint would fare any better. Perhaps the goal of the complainant is not to score a legal victory, but to judicially harass the artist.

You don’t have to like the Nekschot, Charlie Hebdo, or Zeon drawings in order to condemn what’s been done to their creators. The fact that all this work is controversial is only more reason to protest the attempts to muzzle these gadflies. People who say uncontroversial things don’t have to rely on free-speech protections; by definition, that valuable shield only benefits those who speak harshly or outrageously.

I would’ve expected the authorities in the land of Voltaire to understand that, and to act accordingly.

March 13, 2015 Unhappy with a Moment of Silence, Winter Garden City Commissioners (FL) Vote to Bring Back Public Prayers
"We would only end up paying a 500% markup to fix the National Historic Sites, ..."
SltryPrNstyBrtsh&Shrt Hate-Preacher: Christians Should Rule This Country ..."
"Tabula Rasa, who the f*** exactly are you? I am all for people achieving what ..."
Foxglove Richard Dawkins Stripped of “Humanist of ..."
"He's just another Confederate Cry Baby, his side lost and he's still butthurt about it; ..."
Karl Dubhe IV Hate-Preacher: Christians Should Rule This Country ..."
"Some didn't play jew's harp in the marching band, either."
SltryPrNstyBrtsh&Shrt Hate-Preacher: Christians Should Rule This Country ..."
Browse Our Archives
What Are Your Thoughts?leave a comment