Bryan Fischer: Unlike Liberals, I’m a “Live and Let Live” Sort of Guy

Guess who said this?

I may disapprove of your lifestyle, but I’m not going to use force to try and stop you from making those choices.

Answer: Bryan Fischer, a guy who advocates for laws that make life difficult for people whose “lifestyles” he disapproves of.

He said as much on his radio show yesterday: 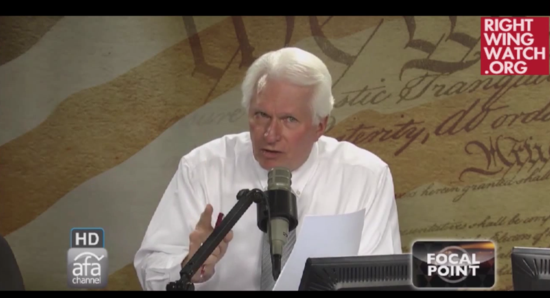 That’s the difference between liberals and conservatives: Conservatives believe in live and let live. I may disapprove of your lifestyle, but I’m not gonna use force to try to stop you from making those choices. You’re gonna have to answer to God, you’ll have to deal with the consequences of your behavior. Liberals are not like that. They want to control every decision that people make. They lust for power and politics is where they find it.

Then again, he’s affiliated with the American Family Association, the organization behind the “Bigotry Map,” full of groups that, at worst, disagree with conservative Christian beliefs.

It’s been said before, but these people couldn’t tell the difference between a paper cut and a decapitation.

March 13, 2015
Why is Friday the 13th Considered Unlucky? Religion Has Everything To Do With It
Next Post

March 13, 2015 French Cartoonist Zeon Arrested for Anti-Zionist Art
"Mine means "marsh shepherd" in some bastardized version of Welsh, supposedly."
K. Ramsuer Anti-Vax Preacher: “I’ve Got a Vaccine ..."
"Chosen by god - the excuse every suicide bomber, genocidal crusader & witch-burner has used ..."
Bob Jase GOP Lawmaker: Israel and the U.S. ..."
"Walmart heiresses are wealthiest women in the world with worth valued at $58 BILLIONhttps://www.dailymail.co.uk/news/article-2150670/Walmart-heiresses-wealthiest-women-world-worth-valued-58-BILLION.htmlWalmart Seeks ..."
Jim E Jones Televangelist Jim Bakker Owes Customers $156,000 ..."
"”...and the guy says, “Sir, have you had the vaccine?”...”Like the Tiny Handed One, when ..."
adhoc Anti-Vax Preacher: “I’ve Got a Vaccine ..."
Browse Our Archives
What Are Your Thoughts?leave a comment