… the jury in the trial of Pensacola evangelist Kent Hovind returned their verdict convicting Hovind on one of four counts he was facing, and his co-defendant Paul John Hansen on two of five.

Hovind was found guilty of contempt for filing paperwork disputing the government’s right to sell his property. 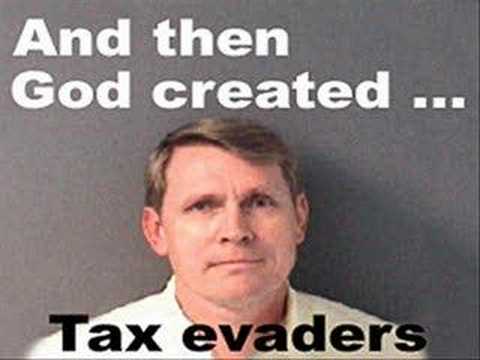 The jury deadlocked on the other three charges that Hovind was facing.

Hovind is on the tail end of a nearly decade-long prison sentence for failing to withhold payroll taxes and “structuring” bank transactions to evade federal reporting requirements. To pay his tax debts, Hovind was ordered to forfeit 10 properties surrounding his biblical theme park, Dinosaur Adventure Land. Instead, Hovind filed “lis pendens” documents warning potential buyers that the property was under legal dispute, which he described to his daughter as “dog crap” on the government’s shoe. It was for those actions that Hovind was found guilty on Thursday.

He’ll be sentenced in June.

Hovind’s list of financial shenanigans and dodgy transactions is as long as my arm. I wrote about his fine record here.

March 12, 2015 Oklahoma Rep's Amendment: If You Plan To Discriminate Against Gays, You Must Post a Sign Saying So
Browse Our Archives
What Are Your Thoughts?leave a comment