Sheriff Tells Sex Offenders They May Not Go To Church, Directs Them To the County Jail For Religious Services March 11, 2015 Terry Firma

Sheriff Tells Sex Offenders They May Not Go To Church, Directs Them To the County Jail For Religious Services 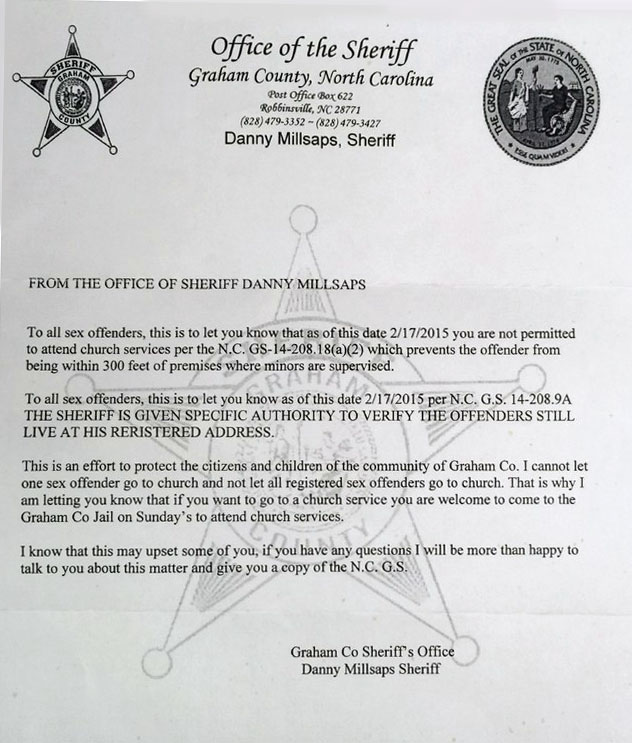 [Millsaps] said he understands the Constitution gives everyone the right to religious freedom. But he said he’s standing by his take on North Carolina law blocking offenders from places where children are present. “I understand I can’t keep them from going to church,” he said. “That may have been misunderstood. I’ll be the first one to say I might have made mistakes in the wording of that letter.”

Millsaps has no immediate plans to arrest a sex offender should one of the 20 in his county attend church Sunday, he said. Graham County Manager Greg Cable said the county attorney is looking into the matter and any legal mistakes would be corrected.

The sheriff’s take on the law is not entirely unique. Also in North Carolina,

In Chatham County, deputies in 2009 arrested a sex offender for attending church, citing the same law. A state Superior Court judge eventually ruled the law as applied to churches was unconstitutional.

In Buncombe County, sex offenders are permitted in church as long as pastors know and are in agreement. … That’s similar to the county’s policy for allowing sex offenders at school events like ball games.

Constitutionally, this is a straightforward issue, one of religious freedom. All residents of the U.S. have the right to practice their faith as they see fit, and that includes going to an actual church.

As a practical matter, however, Millsap’s intention to keep known sex offenders away from kids in church buildings is understandable.