The London-based Islamic Human Rights Commission (IHRC) just announced its annual Islamophobia Awards, and what a tasteful embrace of Islamist terrorism it is:

Charlie Hebdo was given the dubious honour of international Islamophobe of the year. In January this year, 12 people were killed after Islamist gunmen stormed the magazine’s offices in Paris. Brothers Cherif and Said Kouachi claimed that the attack was in retaliation for the magazine publishing cartoons of the Prophet Muhammad, which many Muslims find extremely offensive. … The magazine often publishes cartoons that mock a range of religious and political figures.

The Islamophobe Awards have been praised by such luminaries as the former Archbishop of Canterbury, Rowan Williams.

… was not an endorsement of the attacks but was meant to be satirical. 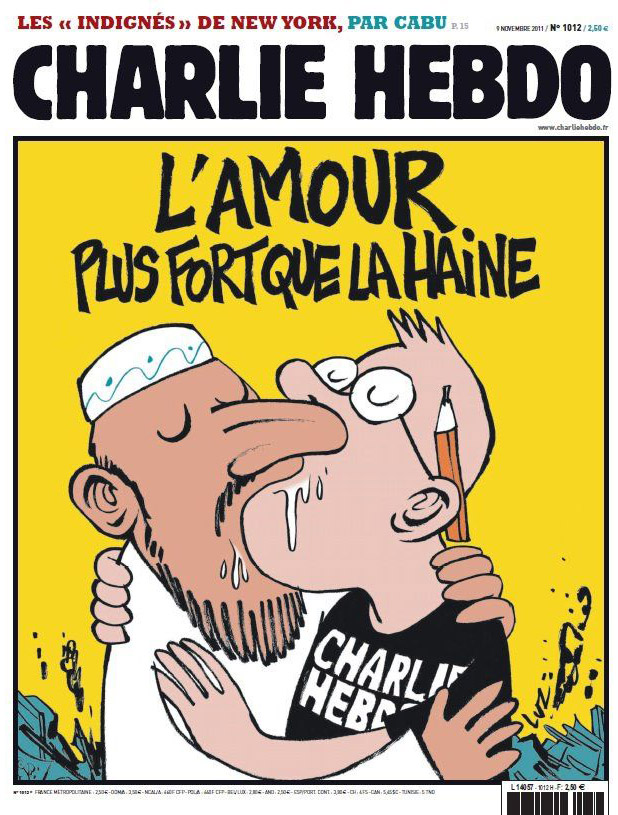 British Muslims voted online to determine the winner, and it wasn’t even close.

While he professes to find the Kouachi brothers’ jihadist slaughter “barbaric,”

… he points out that the publication of the cartoons led to injuries and deaths in protest marches across the Islamic world, including in Pakistan and Niger, yet the magazine was absolved of any responsibility. “You cannot have one side responsible and one side not responsible,” he says.

It is the classic wife-beater’s defense: You had a smart mouth, so I had to use violence. You didn’t do what I told you; look what you made me do, bitch!

The awards are Shadjareh’s idea of levity:

“One of the reasons is to challenge the stereotyping that Muslims have no sense of humor, they are always angry, to show that we also can use humor and satire to address serious issues of our time.”

Yeah. Proverbially pissing on the corpses of a dozen slaughtered artists and journalists is a great way to show that Muslims aren’t nasty, humorless, and angry at all.

Douglas Murray explains it rather well:

Of course [the awards are] not very funny, because only two months ago another group of people who thought Charlie Hebdo is ‘Islamophobic’ went into the magazine’s offices and gunned down their journalists and cartoonists. This is the way the pattern works now — the Islamic terrorists break through the front door with Kalashnikovs, and then a whole network of fellow travellers try to sneak in through the back door and explain why the cartoonists and journalists might have had it coming.