In the debate about whether “morality clauses” should govern the private lives of Catholic school teachers and students, San Francisco is the next battleground.

And while Archbishop Salvatore Cordileone (below) is firmly in favor of an anti-LGBT, anti-choice morality clause in San Francisco Catholic schools, area officials, teachers, and students aren’t having it. 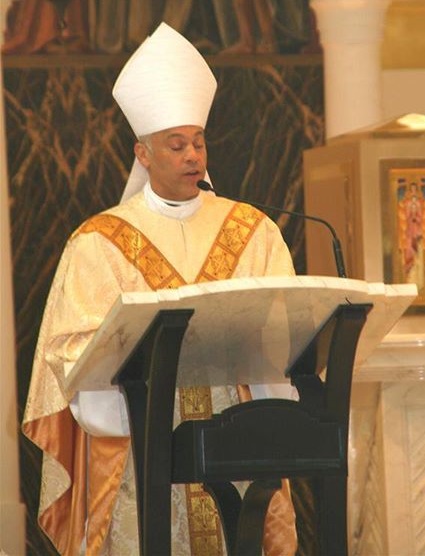 Cordileone has included his “morality clause” in a new version of the school handbook and proposed changes to labor contracts for teachers at four high schools. In response, the San Francisco Board of Supervisors unanimously passed a resolution last week in opposition:

“These actions really conflict with the values of San Francisco,” said Supervisor Mark Farrell, who introduced the resolution. “In San Francisco, we stand up for everyone. We stand up for our LGBT community and honor and embrace those who do the same.”

Farrell, a practicing Catholic, said on Tuesday that they create “a culture of fear that has no place in our schools right now.” He has previously said city officials are considering legal action to prevent what he described as Cordileone’s discriminatory measures from going into effect.

In addition, a dozen people from the affected schools spoke during the public comment portion of that school board meeting, with only one defending the morality clause. More than 300 teachers and staff from the four affected schools also cosigned a statement:

“We believe the recently proposed handbook language is harmful to our community and creates an atmosphere of mistrust and fear,” according to the statement signed by 355 teachers and staff members. “We believe our schools should be places of inquiry and the free exchange of ideas where all feel welcome and affirmed. Such language has no place in our handbooks. We respectfully ask Archbishop Cordileone to use the faculty handbook currently in place.”

“This language in this judgmental context undermines the mission of Catholic education and the inclusive, diverse and welcoming community we prize at our schools,” the statement said. “It is an attack not only on teachers’ labor and civil rights, but on young people who are discovering who they are in the world.”

There is a clear shortage of “inclusive, diverse and welcoming” Catholic institutions in the United States. It’s crucial to defend those who recognize and protest against clauses that brainwash them into being people they’re not.

March 11, 2015
Pro-Life Journalist Argues That Contraception, Which He Says Led to Gay Marriage and Divorce, Will Destroy Us
Next Post

March 11, 2015 "Anti-Gang Pastor" Shaun Harrison Arrested For Drug-Dealing and Shooting 17-Year-Old Student In the Head
Browse Our Archives
What Are Your Thoughts?leave a comment