There are few things I dislike more than a lack of curiosity. To be curious is, by necessity, to ask questions, and asking questions is the engine for creativity, innovation, and growth.

Journalist and author Warren Berger — an old friend from my days as a New York City magazine editor — is a fellow question-lover. Not only has he written a book about it (A More Beautiful Question: The Power of Inquiry to Spark Breakthrough Ideas), he is also the father of Question Week, a celebration of inquisitiveness and a challenge to ask more (and better) questions. Question Week 2015 just kicked off, not coincidentally concluding on Albert Einstein‘s birthday, this Saturday.

— What prompted you to start Question Week?

The idea is, it’s good for us to pause at times and ask questions and think about why we’re doing what we’re doing. But there never seems to be a time on the schedule marked “Ask meaningful questions.” People in general are moving at a faster pace, they’re more bombarded with noise and messages, and they’re caught up in “doing.” Questioning requires slowing down and stepping back. So Question Week is about giving yourself permission to take the time to ask some thoughtful questions about your career, your life, the world around you.

— Why do we need a dedicated question week to begin with? Shouldn’t all of us feel free to question anything at any time?

Yes, we should be questioning on a regular basis. But we don’t. We tend to operate on auto-pilot. We get into habits and routines. We accept a lot of stuff as a given, without questioning. So maybe by having a week where we are encouraged to question, it will jumpstart that curious, questioning behavior that is part of being human.

— Is there a question deficiency in U.S. education? If so, does it extend into higher education as well?

Definitely. Our education system does not encourage questioning; it seems to stifle it (not necessarily intentionally). If you look at the research on this, kids are in peak questioning form around age 4 to 5 — a 4-year-old girl, in particular, is a questioning machine! Then there is, in most cases, a steady decline in question-asking through grade school.

There are various factors that contribute to this, but it certainly doesn’t help when you have an education system that places value on memorized answers, not thoughtful questions. Overloaded teachers may not even have time to take questions — and heaven forbid if a question is highly imaginative. That’s likely to be seen as off-topic.

The problem does extend to higher education, though of course there are exceptions — there are always some teachers or professors who encourage and stimulate questioning by students. They are usually the best teachers, and their students tend to be more engaged. But there aren’t enough of them.

— How many Question Weeks have there been now? What were the results?

This is the first Question Week. Last year at this time, I did a Question Day — timed to Einstein’s birthday on March 14 (Einstein said, “The important thing is not to stop questioning.”). We got some media attention and a lot of action on Twitter. Some schools around the US got involved and did questioning exercises in class. It was pretty cool, so I decided, let’s extend it to a week. And this year I’m partnering with a handful of organizations, such as The Right Question Institute and Ask Big Questions,  that specialize in questioning.

— Is your message different from the “Question Everything” motto?

“Question Everything” is part of my message, for sure. But I’m also saying: Questioning is good for you. It’s good for business — many great innovations, I’ve found, can be traced back to an interesting question someone asked and then pursued. It’s good for society. Actually, my motto is, “Questions are the new answers.” I borrowed that from some folks in Silicon Valley, where questioning existing business practices is a way of life. 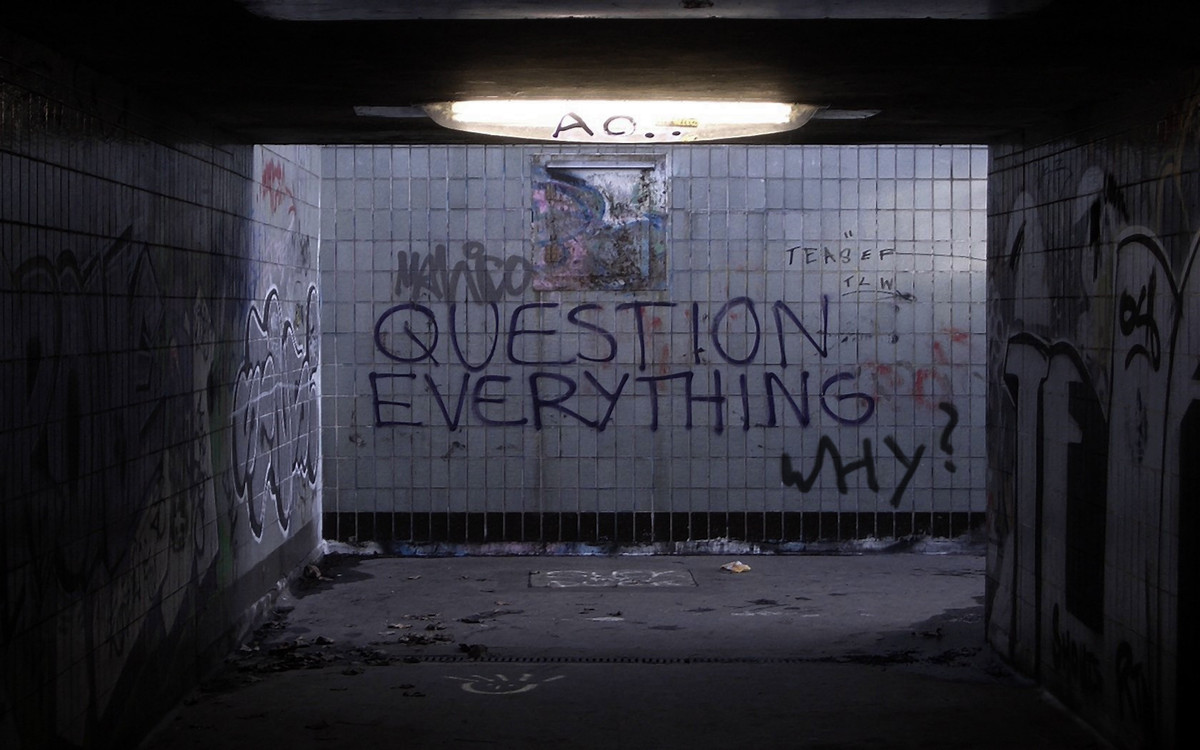 — Are you a skeptic? If so, were you born that way or did you acquire your skepticism more gradually?

I’m actually not a skeptic by nature. I’m much more accepting than I should be. But I think being a journalist, over time, taught me to question what people say, and to challenge conventional wisdom. And ever since I got into writing about questioning, I’ve gotten better about asking “Why” more often.

These days, I’m trying to adopt a George Carlin point of view. He’s one of my “master questioner” heroes. He just looked at everything and asked, “What’s really going on here?” But I’m not quite as cynical as Carlin, and I think that’s a good thing.

— Is your initiative also an attempt to promote academic truth-finding?

Not really. It’s more about truth-finding for all of us. And it’s about “problem finding.” I’m a big believer that we need to find more problems, the problems no one is talking about. Therein lies opportunity to improve things. You uncover problems, and the root cause of those problems, and potential solutions, by asking a lot of Why, What if, and How questions.

— Is there a political or countercultural component to it, a rejection of authority?

I would say there is an element of that. Questions are a means of asserting power. They enable people to be heard, to call attention to things that aren’t working or don’t make sense or aren’t fair.

There is also a class issue in questioning, I believe. People who are more privileged and confident of their place in society feel entitled to ask anyone anything; people who are from less privileged backgrounds may feel that it is risky for them to ask questions. They might get fired, or be labeled as a troublemaker in school. This is a very big issue I think, because if there is a link between questioning and success in business — which there seems to be — then we really need to make sure that everyone feels entitled to ask questions.

— Can Truly Big Questions ever be resolved, such as the central questions in philosophical and religious debates? Is there any point to debating the existence of gods, for instance?

I love questions that aren’t easily resolved — the kind of questions you can’t get an answer to on Google. And I think the point of having philosophical or spiritual debates is the debate itself, which may get us to think in new ways. Having said that, I’m partial to what I call “actionable questions” — questions that are big and ambitious, but that also can be acted upon, in some way. To me, those are the “beautiful questions” — because they have the potential to bring about change.

The hardcover and Kindle versions of A More Beautiful Question are available here. The paperback edition will come out in October. For more background about the book, click here.

March 10, 2015
High School Student in Maine Remained Seated During the Pledge... and Got Sent to the Principal's Office
Next Post

March 10, 2015 God is the Ultimate Alpha Male
Browse Our Archives
What Are Your Thoughts?leave a comment