In Iraq, A Nine-Year-Old Is Shot Through the Head To Shouts of “God is Great” March 10, 2015 Terry Firma

In Iraq, A Nine-Year-Old Is Shot Through the Head To Shouts of “God is Great”

Is the enemy of my enemy my friend?

Not if you consider what Shia militiamen did to a nameless Iraqi boy, about nine years old, suspected of being an ISIS sympathizer. The men who captured him think that he shot at them, a charge he denies:

“By God, I did not fire one single bullet!” 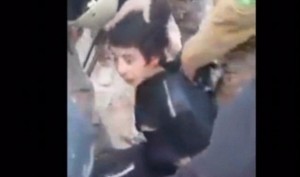 For a few moments, it seems as if one fighter, who still has a shred of humanity left, will save the boy’s life. He steps in front of the captive and shouts

“What’s wrong with you? Nobody shoot!”

But then he is ordered to step aside, and a fellow soldier fires a salvo into the boy’s head and body, killing him instantly… to enthusiastic cries of “Allahu Akbar!”

The execution, caught on video (caution: highly disturbing), immediately became an ISIS propaganda piece, as the two sides struggle to accuse each other of committing the worse atrocities.

March 10, 2015
Defining Persecution Down: Under New Bill, U.S. Will Grant Asylum To Homeschooling Parents From Western Countries
Next Post

March 10, 2015 Fox News Discusses if Terminally-ill Cancer Patient Who Wants to End Her Life is Cowardly
"I calls 'em like I sees 'em!"
democommiescrazierbrother TN Republicans Tell Colleges to “Prohibit” ..."
"I think it's "Gaite Parisienne" (I haven't figured out how to do the accent on ..."
Erik1986 TN Republicans Tell Colleges to “Prohibit” ..."
"And what's truly amazing--not in a good way, btw--is that he hasn't reached his limit."
democommiescrazierbrother Scott Lively: I Asked God to ..."
"I would go even further: No mail-in, One voting day (but that should be a ..."
Bert MAGA Cultist: “I’ll Admit It. I ..."
Browse Our Archives
What Are Your Thoughts?leave a comment