High School Student in Maine Remained Seated During the Pledge… and Got Sent to the Principal’s Office March 10, 2015 Hemant Mehta

Remember those three young ladies at South Portland High School in Maine who caused all sorts of chaos by reminding students during morning announcements that saying the Pledge of Allegiance was optional? 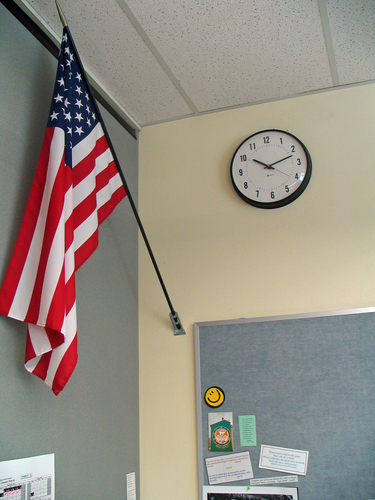 Apparently, they inspired a junior at Belfast Area High School (also in Maine) to remain seated during the Pledge… and he got sent to the principal’s office as a result.

In a letter sent to the district by the American Humanist Association’s Appignani Humanist Legal Center:

… on Friday, March 6, he remained seated during the recitation, but when he did so was confronted by his teacher, who ordered him to report to the office for what she perceived as misbehavior. When he went to the office he tried to explain that he was merely exercising his constitutional rights, but he received no support. Instead, the administration took the position that standing for the Pledge is mandatory and warned him that failing to stand for the exercise in the future would result in serious consequences.

The response from district officials was swift:

RSU 20 Superintendent Brian Carpenter said Monday that he was aware of the matter and that it has been addressed.

Carpenter said Monday that the student was within his rights to opt out and that teachers have been notified to that end. No disciplinary action was taken, he added.

Another news report offers a bit more defensiveness from Carpenter:

“The request was (that he) at least stand and show respect but he doesn’t have to say the pledge,” Carpenter said Monday.

Carpenter acknowledged that federal law prohibits teachers from forcing students to stand for the pledge. He said he would send an email to Belfast High’s faculty reminding them of state and federal laws related to the pledge.

It’s just incredible that administrators everywhere haven’t figured this out yet.

March 10, 2015
What Would a Secular God Look Like? An Atheist Searches for a Realistic Higher Power in This New Book
Next Post