In June of last year, Christy O’Donnell was diagnosed with Stage IV lung cancer. By time it was discovered, the cancer had spread to her brain and tumors had developed in one lung. Over the course of a number of treatments, O’Donnell, a Los Angeles attorney, has extended her initial prognosis, but death is the inevitable outcome.

Her doctor told her she is likely to die by “drowning in her own fluids” from her lung cancer, she says.

O’Donnell is campaigning for end-of-life rights in her home state, so that, when the time comes, she can die on her own terms with her daughter at her side. She is working with the same group, Compassion and Choices, that helped publicize Brittany Maynard‘s story last year.

Well now a single mother in California with terminal cancer is campaigning for the very same right, to end her battle at home with her daughter. But is this plan, is it a brave plan or a cowardly plan? 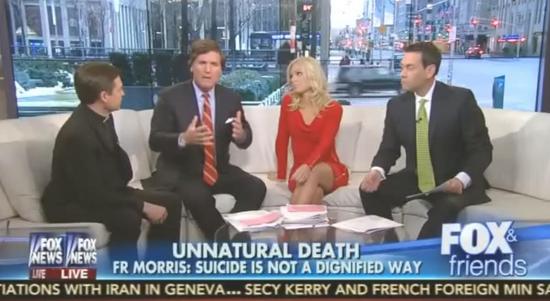 To his credit, Morris replied that he wouldn’t call O’Donnell’s actions cowardly. Things quickly went downhill from there, however, as he put forth some really specious claims:

Well, I wouldn’t say that it’s cowardly. I certainly wouldn’t say it’s brave because you never know what’s going on in the soul of that individual person… There’s two major points, I think, that are important to keep in mind. Number one, when Brittany was going through this, all of the right-to-assisted-suicide group that was behind her said, “Oh no, this is completely about her. This doesn’t affect culture… It’s not making anybody else fall into this. No, this is about her personal right.”

Obviously, here she is citing Brittany, and she remembers that Brittany had this, quote, right to kill herself with the assistance of medical personnel. These things affect culture, these laws, these decisions affect culture — and not for the good.”

This is simply false. Far from concealing the fact, Compassion and Choices is a group that openly advocates for end-of-life legislation. Brittany’s choice to end her own life was personal, as it should be, but the right to do so (or not) in similar circumstances is, of course, not limited to a single person in a single instance. That’s not how our laws work, and that’s the exact opposite of what right-to-die activists, including Brittany Maynard, advocate. They want the legal option to exist; the choice to exercise it is the personal part. Whether Morris intends to or not, he is significantly misrepresenting the facts.

After Morris recounted the recent death to cancer of a family friend, and what he saw as the ensuing legacy of a mom who fought to the end despite the “terrible, terrible, terrible” suffering she endured, co-host Tucker Carlson piped up.

While he acknowledged that it is “hard to judge” someone with stage IV lung cancer, he wondered,

… Why is this playing in public? Why is this a political issue? It’s not hard to kill yourself. Like, you can do these things without trying to force your views on others and to change the law, and to make it into, again, a political spectacle.

This is what both Morris and Carlson seem to be unable to grasp: asking to have the legal right to do something is not forcing anyone else to take that action. The people trying to “force [their] views on others” are the people like Carlson and Morris, who are saying that because they personally think there is value to a protracted, painful demise, there should be no alternative for anyone else. Right-to-die activists are not asking for the law to tell dying people how they must die. That’s what Carlson is doing.

To paraphrase Jon Stewart, Mr. Carlson, you’ve confused people “forcing their beliefs on you” with “not being able to force yours on them.” Which, I guess, is all part of that conservative “religious liberty” Fox News trumpets — the liberty to curtail other people’s rights based on your beliefs.

March 10, 2015 Highlights from the Ex-Muslims of North America's Reddit AMA
Browse Our Archives
What Are Your Thoughts?leave a comment