If you answered “the right not to incriminate yourself,” founding father James Madison, who wrote the Bill of Rights, would’ve appreciatively clapped you on the shoulder. But the U.S. Air Force might just tell you that you’re an oaf.

An Air Force test question about constitutional rights has led to accusations that the service is not only confused about religious freedom protections, but also believes civil libertarians are predators. 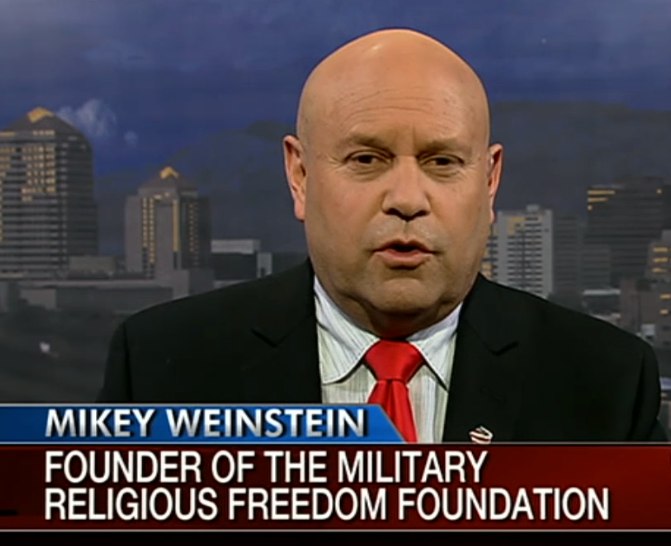 One captain sent an email to the foundation saying the test asks which “commonly violated civil liberty” is protected by the Fifth Amendment. The captain tried to pick the answer that defined the legal protections under the amendment, but he was told he was wrong. The captain, whose name Weinstein is withholding, eventually selected the answer that said the Fifth Amendment says “Congress shall make no law prohibiting the free exercise of religion,” which the test accepted as the correct answer.

Weinstein does, and I understand where he’s coming from. He’s upset for two reasons:

1. The Air Force was unable to correctly describe the Constitution that airmen are sworn to defend; 2. By saying that religious freedom is a “commonly violated civil liberty,” the test implies that groups like his prey on Christians. …

Weinstein’s group is calling for an aggressive investigation into how the mistake happened and punishment for those involved. “The approved solution of the Air Force is that your free exercise rights are under attack — and let me assure you that they don’t believe they’re under attack by anybody other than civil rights organizations like the Military Religious Freedom Foundation,” he said.

An Air Force spokesperson said the test question — or at least its answer — would be fixed.

March 9, 2015 Glory, Glory, Hole-lelujah
"You don't normally hear of autopsy reports that read like bingo cards."
Dmar3 These People Didn’t Leave Their Churches; ..."
"I saw.. a lot of text. I saw stuff about denying the big bang. Determinism. ..."
Makoto A GOP Lawmaker’s “Earthen Vessel” Rant is ..."
"Remember how pink hair lady keeps talking about cows driving tractors in heaven and cities ..."
Makoto Evangelist: Genetic Testing Companies Like Vaccines ..."
"You know, I tried reading a few of his, but they never hooked me in ..."
Makoto Richard Dawkins Urges People to Sign ..."
Browse Our Archives
What Are Your Thoughts?leave a comment