In County with “In God We Trust” Plaque, The Satanic Temple Wants to Put Up Sign Reading “E Pluribus Unum” March 8, 2015 Hemant Mehta

In County with “In God We Trust” Plaque, The Satanic Temple Wants to Put Up Sign Reading “E Pluribus Unum”

For weeks now, I’ve been writing about how Clark County (Washington) officials, after initially saying no, have gone ahead and approved an “In God We Trust” sign in city hall.

An atheist said last week that he wanted to petition to put up a sign next to that one reading “In Dissenters We Believe.”

Soon, another voice may be added to the mix: The Satanic Temple.

The head of the Temple’s Seattle chapter tells me she will soon petition for a sign in city hall that says “E Pluribus Unum” (out of many, one), our nation’s original (but unofficial) motto. Below is a mockup of what the sign might look like: 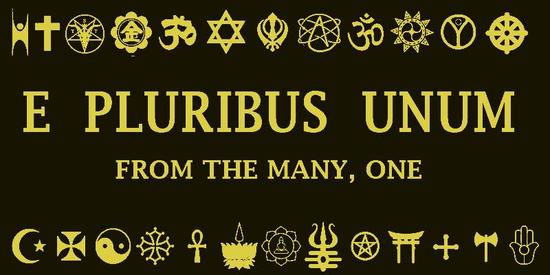 I’m sure the inclusion of the pentagram symbol near the bottom right will cause everyone’s heart to increase three sizes.

Right now, there’s only a Facebook page for the campaign, but the group hopes to submit a formal proposal soon and fundraise whatever is necessary to put up the plaque.

March 8, 2015 Environmental Officials in Florida Were Ordered to Stop Using the Phrases "Climate Change" and "Global Warming"
"My thoughts exactly."
Wayne Thompson Under Pressure, Alabama Approves “S8TAN” License ..."
"He is a fat ass. LOL!!! I'm a big girl, so I'm not just being ..."
ADavis After Baptist Pastor Tells Wives to Lose ..."
"Aye!"
Andy Horsuroddinon Scott Lively: I Asked God to ..."
"Even in cases where the party at fault immediately accepts responsibility there can be significant ..."
Brian Shanahan Scott Lively: I Asked God to ..."
Browse Our Archives
What Are Your Thoughts?leave a comment