Three Kids Died In a Traffic Accident In Front of Their Mom, But No Worries: God Suffers and Empathizes March 6, 2015 Terry Firma

Three Kids Died In a Traffic Accident In Front of Their Mom, But No Worries: God Suffers and Empathizes

A mother and her three children were walking to the grocery store. They waited for the crosswalk sign to signal that it was safe to cross the street. But it wasn’t safe. A driver ran the red light, severely injuring the mother, and killing her three children.

That unfathomable tragedy happened in Adam Ericksen‘s community not long ago. Ericksen, a progressive Christian, blogs at Patheos’ catchily-named Teaching Nonviolent Atonement, and he wrote about the accident with lots of obvious compassion. In fact, that’s part of his point: the way to react to such a local disaster is by mourning with others, and by showing empathy to the bereaved. And I don’t disagree with him.

But there is a theological response that I find extremely pernicious. In the face of such tragedies, many people claim God’s sovereignty in a harmful manner. They say things like, “God is in control,” or “It’s part of God’s plan,” or “Everything happens for a reason.” But after experiencing tragedies like the one that struck my community, I can no longer believe in that notion of God’s sovereignty. 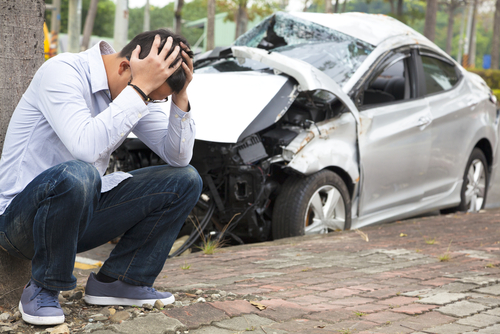 You’d expect the next paragraph to explain that the author was brought low by theological doubt, and that a doorway to a belief system without gods had suddenly opened. But that’s not where Ericksen takes this. At all.

The best way that I’ve found to understand such tragedies is summed up in one ugly word: Sin. The concept of sin has become taboo in many progressive circles, but I think progressives need to reclaim it. Sin says that there is something wrong with the world, that the world isn’t how it’s supposed to be, that a man running over three children is not part of God’s plan.

He next defines sin (never mind what the Bible says) as something we do that we know is wrong — like running a red light in an impatient moment — that leads to terrible outcomes. And that’s fine as far as it goes, but such “sin” sure doesn’t explain why tsunamis wipe out thousands of innocents in coastal regions, or why kids get leukemia, etc. Either there’s an Actor who planned those things (or at least set them in motion), or there isn’t, in which case Ericksen would have to cop to being an atheist.

No dice. He still very much believes in God:

First, God is sovereign in God’s promise to be present in our suffering. [I]n the face of suffering caused by sin, God’s heart is wounded. God suffers with us. In Jesus we discover that God empathizes with our suffering. God enters into the violence and despair of human sin and by doing so, God seeks to heal us in mind, body, and soul.

For real? He suffers? The Almighty, the biggest serial killer we’ve ever known, suffers — just like those parents of the three dead children do, you reckon?

An all-powerful, all-knowing entity empathizes? After either causing the accident or not lifting a finger to prevent it? He feels the parents’ pain?

I would more or less understand this if Ericksen were a Deist who thinks God created everything and then permanently retired, leaving his grand experiment to unspool according to the input and interaction of all human players. But Ericksen’s blog frequently refers to prayer, and he believes in the Bible, and he says that God’s greatest goal is to ultimately heal and console all of us:

Second, God is sovereign in God’s ability to heal, reconcile, and restore the world to himself. As the Book of Revelation claims, in the end God will wipe away every tear. … In the end, everything that’s wrong will be put to right, every tear will be wiped away, and every life will be restored to God’s loving embrace.

He’s the Creator, for goodness’ sake. Why doesn’t he work a little harder? And why would he have devised or allowed all that misery and heartbreak in the first place? Is it to ride in like a white knight — years, centuries, millennia too late — and receive gratitude for kissing our boo-boos? What rational person would want anything to do with that kind of moral bankruptcy?

Ericksen calls the Christian concept of a God who causes bad things to happen to bad people (even if they don’t know what they did wrong) “theological bullshit.” I agree. It just so happens that I see nothing to recommend his own built-on-quicksand theology, either.