Without a doubt, the best religion story of 2011/2012 happened when a gang of Amish vigilantes illegally entered the homes of various brethren whom they accused of doctrinal impurity and forcibly cut the victims’ beards. It didn’t hurt the news value (or the comedy quotient) that the gang leader was a man named Samuel Mullet.

A curious wrinkle in the case unfolded when Mullet and his co-convicts (all the others received sentences from one to seven years) were sent to different prisons; their lawyers argued unsuccessfully that this constituted cruel and unusual punishment,

… placing an overly harsh burden on their relatives, who, because of their religion, cannot travel by plane and have to hire drivers for car travel. For instance, for Mullet’s wife to visit him and three sons convicted in the case, she’d have to travel to Oklahoma, Louisiana and two prisons 160 miles apart in Minnesota.

The other day, the ringleader was back in court: 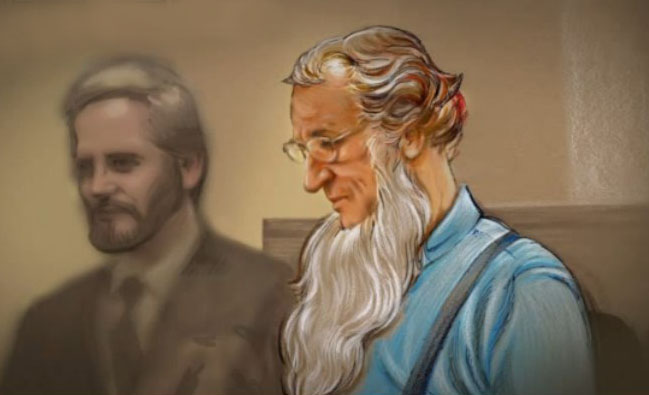 Mullet’s sentence was reduced to 10 years and 9 months and the sentences of the others were reduced to 3 1/2 or 5 years. This comes after the Sixth Circuit U.S. Court of Appeals ruled that the jury was given incorrect instructions and the hate-crime portion of the convictions was thrown out. The jury was instructed “that the faith of the victims must be a ‘significant factor’ in motivating the assaults” when, according to Judge Sutton, they should have been instructed that religion must have been the “but for” factor.

While the decision was ultimately made on procedural grounds, the hate-crime question still looms large. As Judge Sutton wrote in his decision, “the central issue at trial was whether the defendants committed the assaults ‘because of’ the religion of the victims.” While Sutton did not ultimately rule on this particular question, the debate around this question has been heated. Can one commit a hate crime against a member of their own religious group? How are outsiders to judge internal disputes? While the precise nature of the attacks seems to have been “religious” in nature (cutting the hair and the beard, important Amish symbols), was religion the “but for” cause of the attacks?

This suggests, and not for the first time, that U.S. legislatures created a monster (let’s say, a hydra) when they gave hate crimes their own special category in the law books. Equal protection under the law is hardly served, or damn imperfectly, by hate-crime prosecutions.

Thomas Whitley at the L.A. Review of Books explains:

A fraternity hazing ritual in which pledges’ heads and beards are shaved would not be considered by most to be a “religious” act. So, is it the simple fact that the hair and beard are given special significance in the Amish community that make them religious symbols? Would the Mullet attacks be more easily recognizable as hate crimes if, say, the victims were non-Amish bearded men and their beards were clipped because they were not Amish?

When we take a step back we begin to see the work that must be done to classify acts as “religious” or “non-religious,” as hate crimes or as simple assaults. These categories are neither value-neutral nor given. How we construct these categories as a society, though, have [sic] consequences not just on how we see the world but also on how we punish our citizens. Mullet’s sentence was cut by almost 1/3 once his actions were no longer deemed “hate crimes,” yet the actual crime committed did not change. The victims’ beards were sacred one moment and quite mundane the next.

I’m not convinced that court after court should spend its time on these kinds of shadowy determinations. In fact, I’d say that there’s something unsettling about making people’s sentences unequal… for the sake of promoting equality.

What if I’m a black Christian carrying a copy of Charlie Hebdo cartoon and I get stabbed by a white Muslim attacker? Does that entitle me to seeing the perp sentenced to way more jail time — essentially, one sentence for the stabbing, and two elevations of that sentence because I happen to be (hypothetically) Christian and non-white?

If it turns out that Craig Stephen Hicks killed the three young Muslims in Chapel Hill because he couldn’t stand Islam, should he get a more severe punishment than if he’d killed them because he hated the way they parked?

I’d love to hear what you think.

March 6, 2015
Tonight, a Guest Speaker at a Christian College Will Argue "Against Critical Thinking"
Next Post