Is anybody minding the store over there?

An Egyptian-born imam who in 2007 said that Somali-born activist Ayaan Hirsi Ali should receive the death penalty for her criticism of Islam is now a Department of Justice contractor hired to teach classes to Muslims who are in federal prison.

According to federal spending records, Fouad ElBayly, the imam at Islamic Center of Johnstown in Pennsylvania, was contracted by the DOJ’s Bureau of Prisons beginning last year to teach the classes to Muslim inmates at Cumberland Federal Correctional Institution in Cumberland, MD. The records show that ElBayly has two contracts worth $12,900 to teach the classes and to provide the inmates “leadership and guidance.”

ElBayly first received media attention almost eight years ago, when, as the imam at the Islamic Center of Johnstown, Pennsylvania, he raised hell about a scheduled appearance of Hirsi Ali at the University of Pittsburgh. He called her “poisonous” and wanted her banned from speaking. Then he defended killing apostates like her: 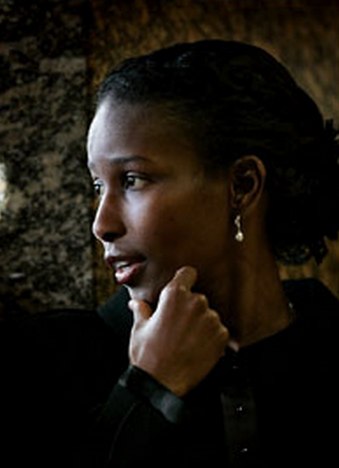 “If you come into the faith, you must abide by the laws, and when you decide to defame it deliberately, the sentence is death,” the imam told a local newspaper ahead of her university visit.

He and a co-worker, Mahmood Qazi, also professed not to understand why an ex-believer would be allowed to open her mouth on the topic of religion at all.

“I don’t want her to poison anyone’s mind,” Qazi said. “She doesn’t believe in God. How can she talk about God?”

After withering publicity, ElBayly announced he’d step down from his Islamic Center post. If he ever did, it was a temporary arrangement; these days, he identifies himself as the center’s imam all over again.

It is unclear how ElBayly, the recent recipient of almost 13 grand in American tax dollars, dealt with the DoJ requirement that contractors sign off on the statement ”I do not endorse nor will I practice or use language in the institution that will support violence, terrorism, discrimination against other inmates.” The poor phrasing can be read to mean that signees will not support violence and discrimination against prisoners, and as Hirsi Ali is not in jail, that would exclude her.

On the other hand, it’s possible that the imam has truly sworn off his old, vile ideas. We don’t know: He didn’t respond to a journalist’s request for clarification. Neither could anyone at the DoJ’s Bureau of Prisons or the Cumberland prison be persuaded to comment.

If the federal government cannot find Muslim clergy without ElBayly’s highly objectionable baggage, I wonder what that says about the candidate pool, and about the religion those candidates represent.

March 6, 2015 Three Kids Died In a Traffic Accident In Front of Their Mom, But No Worries: God Suffers and Empathizes
Browse Our Archives
What Are Your Thoughts?leave a comment