On March 6, 2013, Arkansas State Representative Justin Harris posted pictures of two young girls, 3 and 6, to his social-media accounts. They were now his daughters, he explained — siblings that he and his wife Marsha had adopted after the usual extensive vetting process and a six-month in-home trial period.

But today, when you view the short biographical video that’s posted on Harris’ page at the Arkansas House of Representatives website, and you fast-forward to the 1:51 mark where he talks about his family, those girls, unlike his three biological sons, are neither mentioned nor shown. The girls’ photos have been scrubbed from Harris’ social-media profiles, and the posts about them removed.

What happened to the siblings?

That’s the subject of an investigative piece in the Arkansas Times. It’s a long and convoluted story, and some pivotal facts remain unknown, but the gist of it is this:

Harris (below, right) and his wife “rehomed” the girls — gave them away and abandoned them — to a man named Eric Cameron Francis (at left) and his wife Stacey. Francis, a former youth pastor, had worked as head teacher at Growing God’s Kingdom Preschool, which happens to be owned by Harris. Those godly credentials didn’t prevent Francis from forcing himself on the oldest girl. He is now serving a 40-year prison term for her rape. 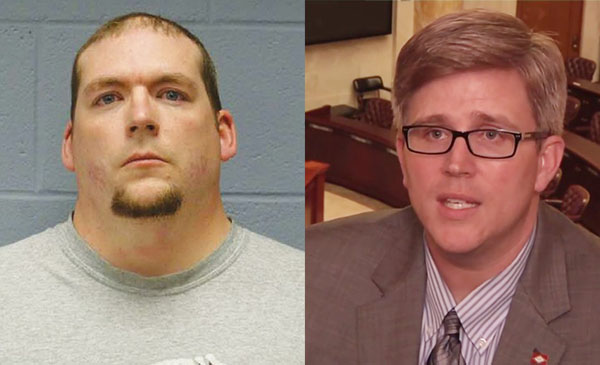 The children, who came from a broken biological home where at least one of them had already been abused, have reportedly been placed in yet another foster home.

Between one and five percent of adoptions go wrong — so wrong that the children involved, almost all of whom have suffered early-life trauma, have to be brought back into the Department of Human Services system that will attempt to find them a new family. In rare cases, though, the adoptive parents simply rehome the children by giving them to a willing taker. While that’s not quite above-board, most states, Arkansas included, don’t have specific laws forbidding it.

According to the Arkansas Times,

Sometimes the families on the receiving end of such transactions turn out to be good parents seeking an easy alternative to the expense and bureaucracy of legal adoption; sometimes they turn out to be abusive or predatory. [In a 2013 investigative report,] Reuters uncovered harrowing stories of kids passed between homes like unwanted puppies, of pedophiles effectively shopping for children online, of prospective parents whose backgrounds bristled with red flags but were never remotely vetted by any authority. In most states, with a simple power of attorney document, a child’s guardian can delegate temporary parental responsibility to another adult.

We do not know why Justin and Marsha Harris rehomed their adoptive daughters; no one is talking. The kindest explanation is that the oldest was mentally unstable and possibly a danger to herself and others (it happens; some children, even young ones, become firebugs, or exhibit suicidal or homicidal tendencies). The Harrises may have dealt with such a situation by offloading the children on the first suitable-seeming couple that agreed to take them.

The Arkansas Times article asks whether Justin and Marsha Harris received a state subsidy for caring for the children, as is customary in some cases; and whether they gave up that periodic payment after the girls were no longer under their wing. Because everybody is tightlipped about the case, in part for privacy reasons relating to the children, those questions can’t presently be answered.

We do know of one other instance in which Justin Harris took money from the state that he shouldn’t have received:

In late 2011, he tangled with the agency [the Department of Human Services] over overtly Christian practices at Growing God’s Kingdom, which receives public funding under the Arkansas Better Chance program. At the request of an organization promoting separation of church and state, a DHS inspector investigated whether the preschool was using taxpayer money to teach a Christian curriculum; she found regularly scheduled Bible study in most classrooms, scripture posted on the walls and children singing “Jesus Loves Me.”

When a local journalist asked Rep. Harris to explain what happened with his adopted daughters, he refused, saying that the paper was out to “smear” him. “It’s evil,” he added.

When asked whether he rehomed his adoptive children with another family, he replied, “I’m not confirming that.” When asked about the statements made in the State Police report in the Francis case, Harris said he hadn’t read the file because of the disturbing descriptions of sexual abuse that they contain.

Harris then quoted Isaiah 54:17: “No weapon forged against you will prevail, and you will refute every tongue that accuses you.”

It’s anybody’s guess what the two abandoned girls think of him.

As the adoptive father of two daughters — three, by this time next month! — I find this an especially compelling and heartbreaking story. I’ll keep an eye on it, and revisit it here on Friendly Atheist if salient new facts emerge.