The McBain Rural Agricultural School district in northern Michigan is looking for a new Superintendent.

But none of you can apply because one of the requirements is a “strong Christian background and philosophy”: 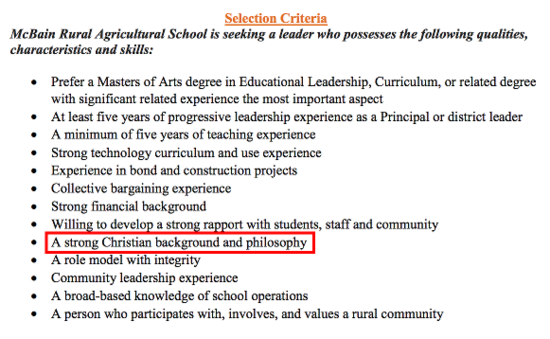 Looks like that’s about to change, however, now that the ACLU is involved. In a letter to district officials, the group said:

Of course, there is nothing wrong with a public school district hiring a superintendent who happens to be religious. However, the religious beliefs of a candidate for an administrative position in a public school system cannot be the basis for a hiring decision. Furthermore, candidates of any religious background, or no religious background, must be welcome to apply and must be given full and equal consideration for the position.

We hope that you will respond to this letter by explaining that the inclusion of the “strong Christian background and philosophy” criterion was somehow a mistake and that you will change the job description right away. Even if it was a mistake, however, we are distressed by how many administrators and staff must have read the job announcement without thinking it was wrong or demanding that it be changed. Moreover, we wonder how many excellent candidates who are Muslim, Jewish or not religious read the job description and decided not to apply because they believed they were not wanted. Indeed, how many top-notch candidates who are Christian decided not to apply because they thought it was improper to impose a religious test on a public school administrator?

The letter also points out that school board unanimously approved this language for the job posting.

The Michigan Leadership Institute, which is facilitating the superintendent search, says this was all just a big mistake:

Michigan Leadership Institute regional President Scott Crosby is coordinating the district’s job search. He told The Associated Press that he mistakenly included the Christian criteria and says it’s being removed.

Sure. Just a mistake. Even though you’ll never see a public school district “accidentally” say applicants have to be Muslim or Pagan…

March 5, 2015
Bill Nye, Ever the Scientist, Admits He Was Wrong About GMOs and a Revised Edition of His Book Will Rectify That
Next Post