***Update***: The Freedom From Religion Foundation has sent a letter to the district as a result of this post. I’ll post another update when FFRF gets a response.

Every morning, students at White Oak High School in Texas hear their morning announcements… along with a daily Bible verse read by Principal Dan Noll.

If you’re thinking that sounds illegal… you’d be right. The 1963 Supreme Court case Abington School District v. Schempp put a stop to school-sponsored Bible readings and subsequent rulings have only affirmed that idea.

Even Texas should’ve caught up with the law by now.

How do we know this is going on?

A student at the school recorded the announcements three separate times over the past month and provided me with the audio, which you can hear below for the first time:

… from Proverbs 28:10: He who leads upright along an evil path will fall into his own trap, but the blameless will receive a good inheritance.

Proverbs 15:8: The Lord detests the sacrifice of the wicked, but the prayer of the upright pleases him… A moment of silence.

From Luke, Chapter 1, Verse 38: Surrendering is the best demonstration in obedience and trust.

“I am the Lord’s servant,” Mary answered. “May your word to me be fulfilled.” Then the angel left her.

So not only is Noll illegally reading Bible verses to students via the loudspeaker every morning, he’s not even doing it correctly.

In case there’s any doubt about his religious fervor, Noll’s now-defunct blog (which is still linked to from the school’s website, even though it hasn’t been updated since 2012) is called the “I Believe Corner” and has God sprinkled throughout the postings:

Merry Christmas to all and may God be your LIGHT in 2010!

I Believe” has been the foundation for the most of my life. Monday evening, November 9, 2009, I tried to understand why God has been so good to White Oak High School.

The weight of SUCCESS is HUMILITY and our students realize humility begins with a recognition of our dependnece on others and an appreciation of God’s gift of life.

These beliefs are perfectly fine for Noll to have privately. But the preaching has to stop the moment he puts on the Principal hat. Students aren’t targets waiting to be converted — certainly not while Noll is on the clock.

Yesterday morning, I emailed Noll to ask about the Bible readings and whether he is aware that what he’s doing is illegal. He still hasn’t responded as of this posting.

Another concern is that this problem goes far beyond the Principal’s desk. I’m not sure how else to make sense of this tweet from December: 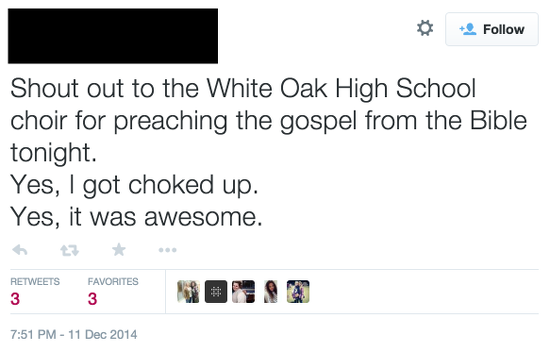 The Freedom From Religion Foundation has been informed.

Needless to say, this practice of preaching Christianity at a public school — by the principal, no less, if not others in leadership positions — is completely out of line and has to stop.

***Update***: This district is already in FFRF’s sights because of illegal prayers said over the loudspeakers during football games and coach-led prayers before the game. The district denied both charges. It’ll be much harder for them to ignore these recordings…