Yesterday, Idaho State Sen. Steve Vick vowed to do all he could to stop Hindu statesman Rajan Zed from delivering an invocation. When that failed, he promised to walk out during the prayer.

So how did that pan out?

Not only did Vick walk out as promised, two other senators joined him: 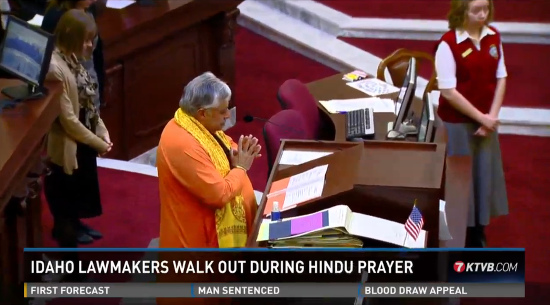 … three lawmakers, all Republican, only came back onto the floor once the prayer was over: Sens. Steve Vick, Sheryl Nuxoll and Lori Den Hartog.

Vick said he walked out of the Senate chambers before the prayer started because he opposes a “government endorsement” of Zed’s religion.

But government endorsement of Christianity is perfectly fine…

Nuxoll says she declined to attend because she believes the United States is a Christian nation.

Hartog said it would’ve been disingenuous to her Christian faith to attend.

But everyone else should always bow down to her God.

How do they not see the hypocrisy here?! Are they that blinded by their faith that they’re incapable of stepping in anyone else’s shoes?!

By the way, no one’s questioning the right of these senators to walk out. But let’s acknowledge that it’s a dick move, especially when they’re the kind of people who push Christian invocations on everyone else.

“We all have different viewpoints, and that is wonderful, that is what makes our country great,” he said.

Zed said he believed members of different religions can work together toward common goals, even if they do not share the same faith.

“It is good to know about others these days,” he said. “We are all looking for the truth. If we can join our resources together, we can reach there faster.”

With that perspective, Zed should really be the person in elected office. Vick’s actions show that he clearly belongs in front of a church. Can’t they just swap spots?

(Thanks to David and Emily for the link)

March 4, 2015 Jesus's House Identified, Except That Whether He Was Born There, Or Ever Lived There, Is "Impossible To Say"
Browse Our Archives
What Are Your Thoughts?leave a comment