A Georgia bill, SB 129, would protect “religious freedom” — which is code for letting Christians discriminate against gay people without getting punished for it. 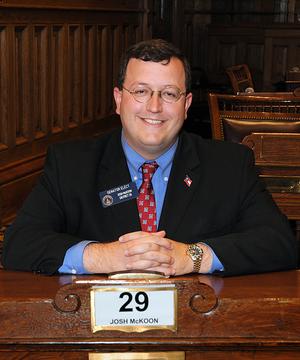 Last year, State Sen. Josh McKoon (R, above) tried to pass it… but failed. He’s trying again this year and the bill already got tabled last month. But McKoon figured out a way to get it past the judiciary committee he heads up: He called for a vote while his most vocal opponent went to the bathroom:

So after he quickly checked in with chairman Josh McKoon at his Senate Judiciary Committee meeting, [Vincent] Fort made a dash for the bathroom. By the time he got back, S.B. 129, the stalled religious liberty bill authored by McKoon, had been pulled off the table and voted through by his committee. Which at the time, consisted only of Republicans.

“When I got back, it was gone. [McKoon] knew I was going to come back,” Fort said. “It seems to me the right thing would have been to delay the vote until all the members who had appeared at the committee were in the room.”

Alerted by a staffer in the audience, other Senate Democrats rushed to the scene, but were too late.

Some politicians reach across the aisle.

Some debate their opponents vigorously.

And some just keep a lot of bottles of water lying around.

There are two other Democrats on the committee, but neither cast a vote on this measure.

None of this, by the way, will stop right-wing groups from praising the fact that the bill passed through committee “unanimously.”

The bill now moves to the Senate Rules Committee, before going to the full Senate for a vote.

March 4, 2015
Jesus's House Identified, Except That Whether He Was Born There, Or Ever Lived There, Is "Impossible To Say"
Next Post

March 4, 2015 Turkish Court Blocks Website of Atheist Group for "Provoking... Hate and Enmity"
Browse Our Archives
What Are Your Thoughts?leave a comment