Tax-Dodging Creationist Kent Hovind Is On Trial Again; Protesters Say the U.S. Only Targets Him Due To His Faith March 3, 2015 Terry Firma

Tax-Dodging Creationist Kent Hovind Is On Trial Again; Protesters Say the U.S. Only Targets Him Due To His Faith

You can’t tax Kent Hovind, because that’s like taxing God.

Pensacola evangelist Kent Hovind, known as Doctor Dino, has long maintained that all of his ministry’s finances and property belong not to him, but to God, and that the Almighty’s belongings are not subject to humanity’s tax laws.

Hovind is on record as saying that 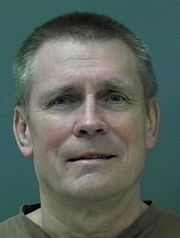 Inevitably, because the Young Earth Creationist refused to “render unto Caesar the things that are Caesar’s” (disobeying Jesus, incidentally), he got into a world of trouble with the IRS. In 2007, after decades of intransigence and shenanigans, and with accruing unpaid bills that the U.S. Treasury was due, a court sent Hovind to prison for a ten-year term.

Even from jail, before the sentencing, Hovind and his family never stopped scheming. The court heard recorded phone calls during which Kent Hovind, from behind bars, and his son Eric, on the outside,

… planned to hide a motor vehicle title and property deeds to prevent the government from collecting the property to pay for owed debt.

This coming August, the elder Hovind, now 62, could have walked free, if it wasn’t for six new charges that prosecutors recently brought against him.

If convicted of the charges — mail fraud for sending “fraudulent” documents contesting the government’s right to sell his property and contempt of court for violating a federal injunction instructing him not to file any more documents — Hovind could have decades more tacked on to his sentence.

His new trial started yesterday, and a group of about a dozen supporters

… crowded around the intersection of Garden and Palafox streets with signs and words of support. The group is planning to be here for the duration on the proceedings. “We pray for justice that Kent be liberated at the shame of the government,” said Alan Hoyle, who came to Pensacola from North Carolina last week for the trial. “They’ve persecuted a non-violent person who has done no wrong.”

The demonstrators — who came from as far away as Texas, Ohio and Colorado — stood on street corners and the courthouse steps holding an array of “Free Kent” signs. Many of Hovind’s supporters have maintained that he is being targeted by the government because of his religious beliefs.

Oh, I see. So his incarceration would have nothing to do with the fact that, according to the government, Hovind

“… the IRS has no record of the debtor [Hovind] ever having filed a federal income tax return.”

Hovind was 43 then, an age at which most Americans have been paying federal income taxes for 20-plus years. Tax authorities estimated that he regularly pulled in between one and two million dollars annually. Some of that income went to pay for legitimate expenses and cash salaries for employees (whom Hovind called missionaries so he could ignore payroll-tax requirements), but he treated vast portions as his personal money.

If a life-long record of fraud and tax-dodging doesn’t tell Hovind’s fans that his faith has nothing to do with the charges against him, I doubt that anything will.

The reality, as exposed by NPR in 2014, is that, for years now, churches and various religious enterprises have managed to avoid virtually all scrutiny from the federal government’s tax authority. As far as we know, the IRS has not conducted even one church audit since 2009.

For fraudsters, shysters, and tax evaders, religious faith isn’t a liability, but an asset; not a financial burden, but a boondoggle beyond compare.

Hovind was just cocky and brazen enough to get caught. Thousands of slightly smarter God entrepreneurs continue to rake in tax-advantaged funds without a worry in the world.

March 3, 2015 Colorado State Rep. Gordon Klingenschmitt: Chapel Hill Muslim Victims Were Killed for Thinking Like Christians
Browse Our Archives
What Are Your Thoughts?leave a comment