When regulars visit the public library in Trumbull, Connecticut, they may well notice that one of its paintings is missing.

The painting, which Dr. Richard Resnick donated to the library, shows Mother Teresa and other women marching, holding signs that say messages including “Planned Parenthood,” “Mission of Charity,” “Feed the Poor,” “Remember the Ladies,” “Hospital Reform” and “Right to Vote,” among others.

Trumbull officials have temporarily removed [the] artwork displayed at the public library over concerns that the use of Mother Teresa’s image in the painting infringes on copyright.

That’s absurd. Any artist may freely render an original likeness of any public figure, especially for non-commercial purposes. There are zero copyright issues here.

So I’m not terribly surprised to learn that the real problem may be totally unrelated to copyright. 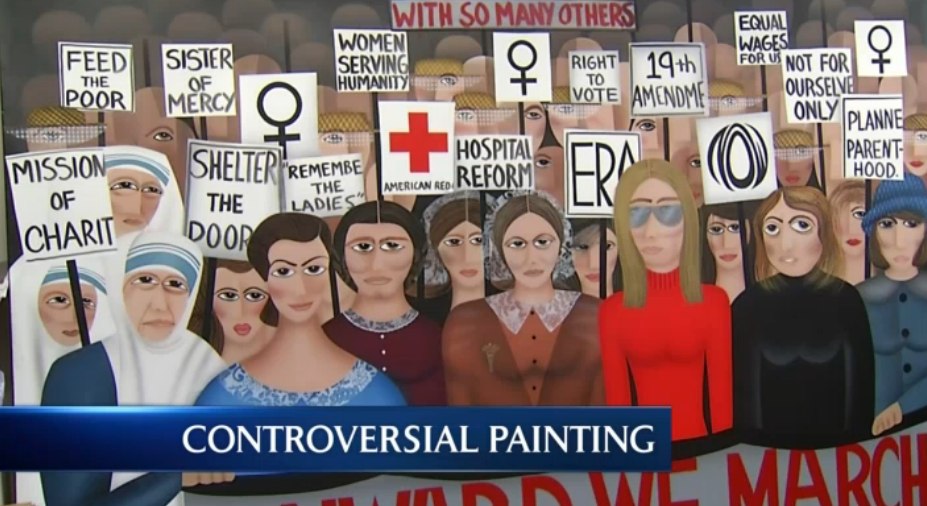 [Resnick’s lawyer] speculates that the controversy may have more to do with Catholic leaders’ recent objections to Mother Teresa being depicted alongside a woman holding a “Planned Parenthood” sign.

The woman in question is the birth-control activist Margaret Sanger, says the Connecticut Post.

The painting is supposed to highlight the importance of various women in our society,” said Michael London, a spokesman for Resnick. …

The town opted to remove the painting because the library lacks a written agreement with Resnick to protect the town against “any potential liability” from the copyright violation allegation, [selectman Tim] Herbst said.

“After learning that the Trumbull Library Board did not have the proper written indemnification for the display of privately-owned artwork in the Town’s library, and also being alerted to allegations of copyright infringement and unlawful use of Mother Teresa’s image, upon the advice of legal counsel, I can see no other respectful and responsible alternative than to temporarily suspend the display until the proper agreements and legal assurances are in place,” Herbst said in a written statement. …

Herbst did not name the organizations that took issue with the painting.

It seems that the selectman and the mysterious complainants are a good match in terms of cowardice.

And … the town took down the artwork “upon the advice of legal counsel”? Trumbull should get a better-informed legal beagle. I’ll eat a nun if the painting is found by a court to be a violation of copyright.

March 3, 2015
City of Windsor (Ontario) Says No to Flying Christian Flag Atop City Hall During March for Jesus
Next Post

March 3, 2015 Jewish Government Official Recalls the Christian Whose Invocation Ended With, "Our Speaker Today Will Burn in Hell”
Browse Our Archives
What Are Your Thoughts?leave a comment