Colorado State Rep. Gordon Klingenschmitt is no stranger to saying ignorant things, but his latest tirade is incredible. Not only does he accuse Craig Stephen Hicks of killing three innocent Muslim students because he was an atheist — a claim which is completely unfounded — he says that Hicks killed the Muslims because they were acting like Christians: 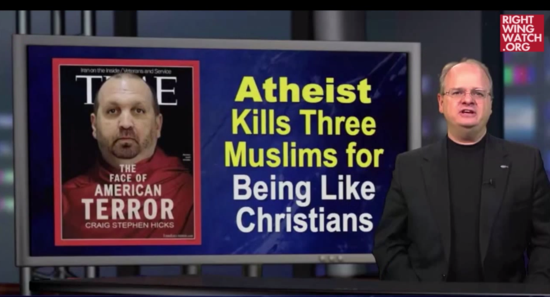 He’s basing this off of an image Hicks had posted on Facebook (read: not even his words) which said radical Christians and radical Muslims have quite a bit in common…

… So he killed the Muslims because they think like Christians.

That just makes no logical sense. These weren’t even “radical” Muslims. They were Muslims who were about as inclusive and tolerant of other people as you can get.

But it’s hardly surprising that Klingenschmitt would turn a tragic crime that had nothing to do with him or his beliefs into an opportunity to claim anti-Christian persecution. He’s based his whole career on it.

March 3, 2015
Tax-Dodging Creationist Kent Hovind Is On Trial Again; Protesters Say the U.S. Only Targets Him Due To His Faith
Next Post