City of Windsor (Ontario) Says No to Flying Christian Flag Atop City Hall During March for Jesus March 3, 2015 Hemant Mehta

In 2012, the city of Windsor (Ontario) raised a flag atop city hall that had a large cross on it. There were some complaints as you might imagine and city officials did the right thing:

[Mayor Drew] Dilkens said raising the Jesus flag in 2012 was a mistake, and that some people complained to the city.

… “It seemed to be an error at that time so when the city clerk reviewed it in future years she determined that it was a religious flag, and followed the policy which council approved.”

That’s how you know you’re in Canada: When there’s a church/state separation problem, they fix it. 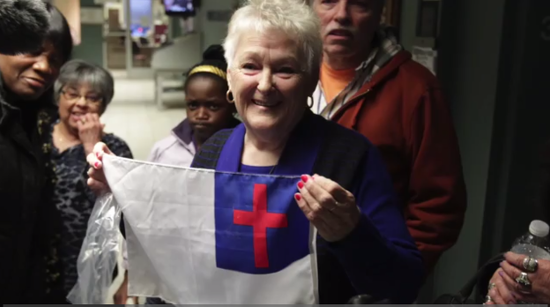 Councillors agreed Monday night with a report from city administration to deny a request to fly a flag in support of the annual March for Jesus scheduled for Aug. 22.

Shirley Walsh, a pastor at Cutting Edge International Church, said the white flag with the red cross on a blue square is not about religion but love.

“We are not a religion,” she said. “We don’t talk about anybody. I’d like to see where they saw discrimination on that flag. There’s nothing on it but a cross.”

Only using #ChristianLogic could someone say a flag with a cross flying during a “March for Jesus” has nothing to do with religion.

This was the third such rejection in a row.

And it’s not about discrimination. The City of Windsor policy says they will not fly any flags promoting “discrimination, prejudice, political or religious movements.” If they opened that floodgate, much like some U.S. cities have done with holiday displays, you’d see all hell break loose, with atheist flags and Satanist flags fighting for space alongside Christian groups.

The city is better off saying no to everybody.

March 3, 2015 Connecticut Town Takes Down Library Painting Because of Ludicrous Mother Teresa Copyright Claim
Browse Our Archives
What Are Your Thoughts?leave a comment