Becoming a Tree: A Practical — and Beautiful — Form of Burial March 2, 2015 Terry Firma

Becoming a Tree: A Practical — and Beautiful — Form of Burial

I don’t mind graveyards, but they do tend to be cold, somber places. Could we instead have memorial gardens of trees and shrubs, each organism drawing life from a human body placed in a biodegradable pod or shroud beneath it?

Burying bodies is a huge waste of space that could be used by the rest of us who are still breathing. Even cremation, though cheaper and easier, can produce a lot of toxic waste. But what if your dead body could be turned into a tree instead? Italian designers Anna Citelli and Raoul Bretzel are proposing just that, in the form of a biodegradable burial-pod project. 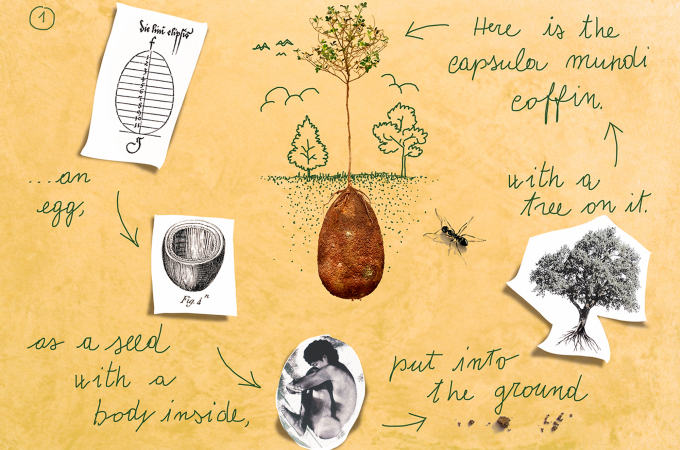 The “Capsula Mundi,” as it’s known, would encase a corpse in an egg-shaped seed capsule and then be buried underground with trees on top of them. As your body decomposes, the tree would gather nutrients from the decomposing pod, and the circle of life would march on.

In many countries, laws will have to be changed or relaxed to allow this, but the U.K. is off to a good start and the United States isn’t too far behind.

I’m an organ donor myself, and that won’t change; when I die, doctors may take what they need. If what is left of me may then fertilize a tree sapling, so much the better. I see poetry in it, and I don’t care whether Dane Cook finds that humorous.

March 2, 2015
Richard Dawkins' Best Piece of Advice? Break Out of the "Anesthetic of Familiarity"
Next Post

March 2, 2015 Bangladeshi Cops Arrest Three Islamists in Hacking Death of U.S. Atheist Avijit Roy
Browse Our Archives
What Are Your Thoughts?leave a comment