At CPAC, Dr. Gina Tells Dave Silverman He Doesn’t Have “Any Right” To Call Christianity a Myth March 2, 2015 Terry Firma

At CPAC, Dr. Gina Tells Dave Silverman He Doesn’t Have “Any Right” To Call Christianity a Myth

“A reliable source of truth… a voice of clarity, wisdom and understanding about [the] issues,”

Her impeccable credentials thus established, let’s take a quick look at what Ms. Loudon has to say about the presence at CPAC of American Atheists president Dave Silverman. CPAC is the annual Conservative Political Action Conference. The footage below, which we hadn’t posted before, is from last year, when CPAC organizers told American Atheists, after first accepting their money and promising them a booth, that they weren’t welcome after all (the money was returned; this year, though, AA had an official presence at CPAC).

In 2014, Silverman stuck around anyway, working the place like a professional gadfly. 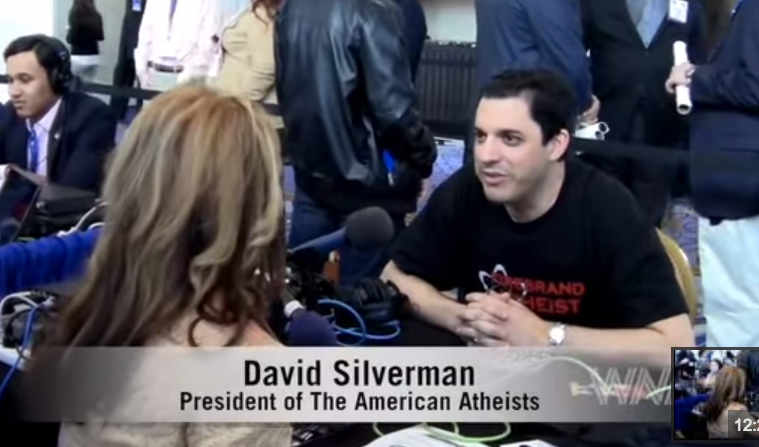 There are multiple points where Loudon has me wondering about her grasp of the facts. But for me, the biggest forehead-slapping moment comes at 11:18, when Loudon responds to Silverman’s contention that public schools deserve a real science curriculum that’s unaffected by religious myth-making. She says:

Silverman, ignoring the assertion that atheism is a “faith,” parries:

I have every right to tell you that your faith is not real, but the government does not, and that’s our point.

Even in the face of Loudon’s terseness and antagonism, Silverman not only defends the constitutionality of his position; with the simplest and most economical of statements, he points out that the First Amendment protects hers, too.

I have my differences with American Atheists, but Silverman’s ability to get his message out regardless of how much his interlocutors badger him and cut him off is damn impressive.

March 2, 2015
Atheist Billboard with the Words “Easter” and “Church” Rejected in Nashville for Being Too “Aggressive"
Next Post