What ISIS Teaches Us About the Value of Arts and Humanities March 1, 2015 Terry Firma

What ISIS Teaches Us About the Value of Arts and Humanities

The U.S., on the whole, embraces economic progress and relentless production to such an extent that art and humanities are seen as “nice to have,” rather than necessities.

Sarah Skwire, in a short, smart piece for (of all things) the Foundation for Economic Education, presents ISIS’ heartbreaking destruction of Assyrian museum pieces as a solid argument in favor of the two embattled academic disciplines.

There is a long history of fundamentalist Islamic groups destroying cultural treasures. The Buddhas of Bamiyan. The “end of the world” gate in the ancient city of Timbuktu. Over 95 percent of ancient Mecca. Countless thousands of ancient manuscripts. [Links added by TF.] Groups from ISIS to the Taliban to Wahabist Saudi clerics have made it clear: everything must be obliterated. 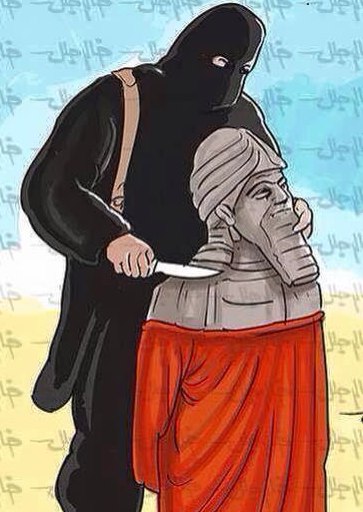 From the 8th to the 14th centuries, the flourishing, trading, creative, scientific, philosophic, artistic, and intellectual marvel that was the Islamic Golden Age produced a ringing argument against the ISIS narrative that their way — the way of extremism and the sword — is the only path to success.

Golden Age science, mathematics, and medicine were the envy of the world. The tolerance and intellectual curiosity modeled by thinkers like Al-Kindi, Al-Farabi, and Ibn Rushd created a civilization where, more than anywhere else, Muslims, Jews, and Christians were able to study, trade, and live in unprecedented peace and productivity. And this Golden Age died when people who would have been very much at home in ISIS began to gain power.

It’s only been in the last few years that I’ve come to see the Enlightenment as potentially analogous to the Golden Age of Islam: it may not be here to stay. If we and future generations are not vigilant, we may yet lose it, over the next century or two, slowly yielding to silliness and superstition, to hogwash and horsefeathers, to censors and scolds.

Are the arts and humanities important? Do they accomplish anything we should care about?

Look at those who want to destroy them. Consider what their ends are. Then tell me.

March 1, 2015
A Somewhat-Scientific Explanation of What Color That Dress Is
Next Post