Rape Pastor Victor Barnard, Who Claimed He’s Jesus, Is Caught in Brazil After a Long Manhunt

The year-long manhunt for Victor Barnard, an American pastor charged with 59 counts of sexual assault, is over. Barnard, who was on the U.S. Marshals Service’s Most Wanted List, was arrested in a beach town in Brazil on Friday. I previously wrote about him here.

From the Minneapolis Star Tribune:

The arrest took place in a condominium by Pipa Beach, considered one of Brazil’s most beautiful coastal locations. Barnard was reportedly staying with a 33-year-old Brazilian woman who previously lived in the United States. Federal police confiscated religious papers, diaries, computers, flash drives and cellphones from the condo.

The 53-year-old suspect was wanted by the Pine County, Minnesota, Sheriff’s Office for allegedly sexually abusing two young girls who were members of his church, the U.S Marshals Service said. … [P]rosecutors in Pine County, Minnesota, issued a criminal complaint that accused him of 59 felony counts of criminal sexual conduct. The manhunt began after a two-year investigation into allegations from two women about Barnard’s alleged conduct while he was preaching to a religious group in Finlayson, Minnesota.

As a pastor, Victor Barnard inspired his congregants with his charisma and apparent devotion to the teachings of Jesus Christ. “I had never met anybody that I thought loved the word of God as much as Victor Barnard did,” [said] Ruth Johnson, a former member of Barnard’s River Road Fellowship. 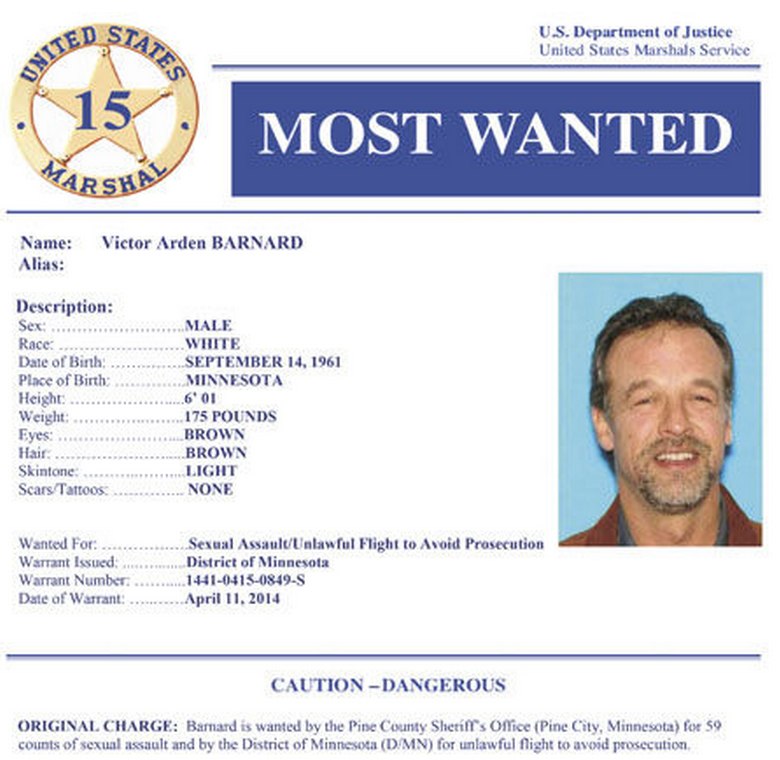 Barnard convinced some parents that he was Christ on Earth, and that he expected their daughters — some as young as 13 — to engage in what he considered womanly duties, including cleaning, cooking, and sex.

“He taught that in the Bible, the church was the bride of Christ and because he was Christ in the flesh, the church was supposed to be married to him,” [Lindsay] Tornambe [one of his victims] said. “At that time I didn’t really understand the fullness of what it meant.”

The complaint filed in Minnesota says Tornambe alleges that she was sexually abused by Barnard from the ages of 13 to 22 while she and her parents were members of River Road Fellowship. Tornambe told investigators the group of 10 young girls and women were known as Alamoths, or maidens. Her group was sent to what she thought was a summer camp, the document says. …

In fall 2011, she was contacted by another former maiden who shared a similar story: [that victim] said she was molested by Barnard from the time she was 12 until she was 20.

The abuse of the girls wasn’t just sexual, but, of course, psychological too. This kind of mental torment must seem totally justified when you’re a child rapist who not only “serves God” but claims divine origins:

Tornambe said she tried to leave the group once, when she was 15. Barnard took back a ring, a veil and other gifts he had given her before she went home to her parents, she said, and her mother cried for a week with disappointment. When Barnard called clergy members, the maidens and their parents together for a meeting shortly afterward, he talked about damnation from God. Fearful, Tornambe went back with Barnard. “I was really scared, and I didn’t know what receiving damnation from God would be like,” she said.

You might think that Tornambe’s parents had no idea what what was going on. Unbelievably enough, you’d be wrong.

Her father recalled Barnard coming to him and rationalizing his having sex with the girls. The father “felt pressured to not say anything,” the complaint continued. “[The father] said he did not know what he was thinking at the time but just remembers feeling so much pressure to not become an outcast and lose everything he had.”

The other known victim, identified only as “C,” has a similar story.

In February 2001, Barnard, C and her parents met. He told her family that he might have sex with her, even though that had already been occurring.

And, as they believed God had commanded it, they went along willingly.

It will be interesting to see if, now that Barnard is in custody, any of the adults who either knew or strongly suspected that he was sexually assaulting underage girls will also be indicted. I hope the prosecutor throws the book at all of them.

(A portion of this article was published on Friendly Atheist before.)