Wheaton College certainly had good intentions when they hosted a Town Hall Chapel for students Monday night. The annual all-school forum is meant to offer an opportunity for students to engage with the College President, currently Philip Ryken, on campus issues. 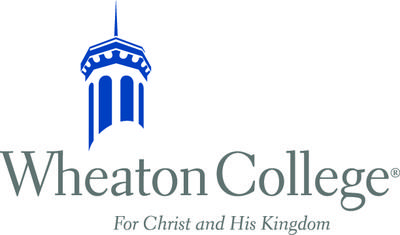 But the goodwill toward men didn’t last. When Philip Fillion, a straight, married senior at the college, approached the microphone with a question about the school’s stance on same-sex relationships, things got weirdly violent. Fillion read his question aloud from a public Facebook note he’d published:

“All students, via the Community Covenant, and all faculty, via the Statement of Faith, are required to affirm a sexual ethic that denies everyone except celibates and married straight people a place in the kingdom of God. This sexual ethic is not at all universal and depends on a reading of scripture that is incredibly narrow and ignores history, culture, and science. The Statement of Faith and the Community Covenant also lack any language about the sacraments of the Christian church. Why is it the case that our college, in documents we all must agree to or be expelled, insists on formally condemning and denying equality to our gay and lesbian brothers and sisters, on spurious theological grounds, yet completely leaves behind baptism and Eucharist, which Jesus Christ himself instituted to grow and strengthen the Christian community?”

As Fillion was walking back to his seat, someone in the audience chucked an apple at him.

And nobody did anything.

“There was no response when the fruit was thrown. No boos, no gasp,” he says. “A student was in line after me and when it was his turn to ask a question, he began his time at the microphone by calling out whoever had thrown the fruit, remarking that such behavior was inappropriate and disrespectful. There was restrained applause for this.”

“President Ryken did not see the incident and did not fully understand what happened until after chapel ended,” Wheaton College told TIME in a statement.

But that wasn’t the end of it. Shortly after the forum, a person who claims to be the apple-thrower posted a letter defending himself on a public wall at Wheaton designated for sharing student opinions. 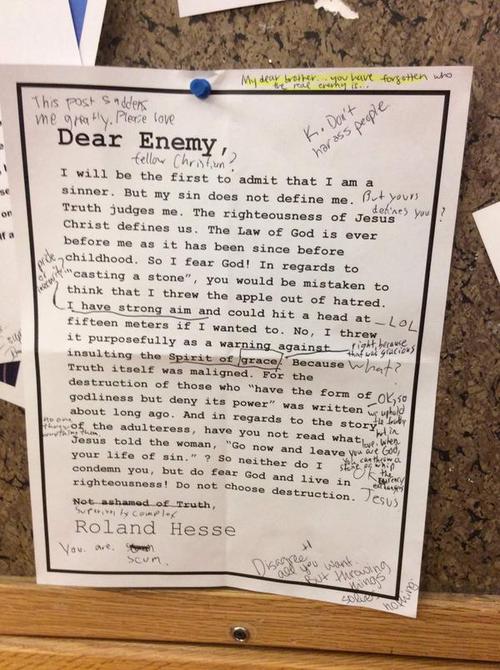 In regards to ‘casting a stone,’ you would be mistaken to think that I threw the apple out of hatred. I have strong aim and could hit a head at fifteen meters if I wanted to. No, I threw it purposefully as a warning against insulting the Spirit of grace. Because Truth itself was maligned. For the destruction of those who ‘have the form of godliness but deny its power’ was written about long ago. And in regards to the story of the adulteress, have you not read what Jesus told the woman, ‘God now and leave your life of sin.’ ? So neither do I condemn you, but do fear God and live in righteousness! Do not choose destruction.

Not ashamed of Truth,

Students have already taken liberties to mark up the note with their own comments. In the margins, students have scribbled “K. Don’t harass people,” and “My dear brother… you have forgotten who the real enemy is.” One person wrote “fellow Christian?” under the greeting “Dear Enemy,” and another circled the word “grace” and drew an arrow to a speech bubble reading “Right, because that was gracious.” Another, under the signatory’s name, wrote “You. Are. Scum.” And another, “OK Jesus.” It’s good to know that some Wheaton students can defend one another — but where were they when their “brother” was dodging a hurled object?

Wheaton is eternally present on the Princeton Review’s list of the most LGBT-unfriendly colleges, and this isn’t its first run-in with students who protest homophobic policies and practices. On his blog Faithfully LGBT, columnist Eliel Cruz wrote:

Wheaton and other Christian schools systemically silence their LGBT students. A year ago, over 100 Wheaton students protested an “ex-gay” presentation. They protested Wheaton’s promotion of reparative therapy — which has been proven to be a dangerous and damaging practice — and the lack of inclusion of the LGBT community on campus.

Indeed, neither Wheaton nor most Christian colleges, have engaged directly with the LGBT students that live in their community. Instead, they bring other voices (typically “ex-gay) from off campus to promote a single damaging narrative. What this says to the students, especially those LGBT, is that their voice isn’t worth listening to.

Wheaton student Justin Massey, a co-founder of the campus LGBT student group Refuge, wrote about the apple incident on his own blog:

I saw peers exert more effort into rationalizing the offense rather than demonstrating support to the LGBT community whose experiences were disrespected. From three separate individuals I have heard that the disruptive student simply felt “the question was just too long,” “the tone of the inquiring student appeared rude,” and even “it was simply a joke gone wrong.” Each of these answers has one thing in common: they take responsibility off of the offending individual in an attempt to absolve this student of displaying any prejudice against a minority group. This incident affected more people than just the student who was hit. While it is wrong to show disrespect to any person, acting against an individual who raises minority concerns holds a different weight. It affirms the hateful messages that tell these already disadvantaged persons that they are not valued and undeserving of respect.

Massey later told TIME that the student has been disciplined and will no longer be on campus. The Wheaton administration has discussed the incident with students but cannot officially comment on what disciplinary measures were taken.

Late Tuesday night, Massey wrote a letter to Ryken and other campus leaders, alerting them of the Forum Wall letter and arguing that the incident was more than just a theological dispute. “Upon reading this letter I feel threatened and unsafe, and I know that I am not the only student who feels this way,” Massey, who is openly gay, wrote. “This action of throwing an item at another student is violent in nature and his sentiments reflected in the Forum Wall post are threatening… My peers and I strongly feel that prompt discussion, discipline, and communication with the student body must take place to explicitly call out these actions and properly deal with this situation.”

Massey and other students, LGBT and allied, met with campus officials Wednesday morning to discuss the situation. “The religious tone and justification that he voiced, that was really frightening to us,” Massey says. “That is why we are asking for the College to specifically recognize that this incident targeted a minority group of people, that this wasn’t just a theological disagreement — this was LGBT students feeling the weight of the actions.”

Let he among us without sin throw the first… apple. And then let his entire student body shame him for living up to their school’s horrific, homophobic reputation. And then let his school finally acknowledge that they have deliberately created a dangerous environment for LGBT students, and let them finally do something about it.

February 27, 2015
Sen. Sheldon Whitehouse Blasts Sen. James Inhofe (a.k.a. the "Senator with the Snowball")
Next Post