Sen. Sheldon Whitehouse Blasts Sen. James Inhofe (a.k.a. the “Senator with the Snowball”)

Yesterday, Sen. James Inhofe (R-OK), attempted to show how climate change science was bullshit… by bringing out a real live snowball. As if temporary coldness in DC offsets the mountains of evidence supporting climate change and our effect on it. 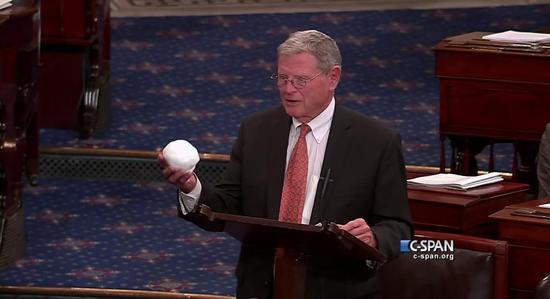 This would be funnier if so many people didn’t take him seriously… and if he weren’t the Chairman of the Senate Committee on Environment & Public Works.

Thankfully, Sen. Sheldon Whitehouse (D-RI), who has long been a science advocate, took to the floor of the Senate afterwards to try and explain, politely, why Inhofe is a damned fool:

I’d just like to complete my remarks with regard to the Senator from Oklahoma and his snowball. I’d like to ask unanimous consent that I show the Earth Now website on the iPad device that I have.

And if you go to Earth Now it’s actually quite easy to load, and you can see how that polar vortex measurably brings the cold air down to New England where we are right now.

The United States Navy takes this very seriously, to the point where Admiral Locklear, who is the head of the Pacific Command, has said that climate change is the biggest threat that we face in the Pacific. He’s a career miilitary officer and he’s deadly serious.

You can either believe the United States Navy, or you can believe the Senator With The Snowball.

It goes on like that for a while… and it’s glorious.

The two senators had something of a showdown last month when Whitehouse introduced an amendment to a bill forcing senators to vote on whether climate change was real and not a hoax. Inhofe — to everyone’s surprise — voted for “real”… but when a subsequent resolution asked if humans had an effect on climate change, Inhofe went the other way. Because, in his words, “The scriptures talk about it.”

There’s Congress for you: Full of elected officials who refuse to accept solid science because the Bible, their constituents, and their donors tell them otherwise.

February 27, 2015 Wheaton College Student Pelted With Apple For Asking Question About Homosexuality
Browse Our Archives
What Are Your Thoughts?leave a comment