The New Mexico Museum of Natural History was going to have a Darwin Day event this month, that was co-sponsored by New Mexicans for Science & Reason, the Humanist Society of New Mexico, and the Freedom from Religion Foundation chapter in Albuquerque.

And that upset local Creationists/Intelligent Design proponents because, in their mind, this was clearly government promotion of religion (or rather anti-religion) and not about science: 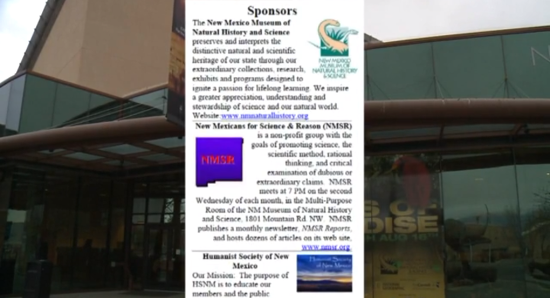 “I thought, wouldn’t it be nice if they could give some other points of view besides the one they were giving, both from a Darwinian view and an anti-religious point of view,” said retired Sandia Labs engineer Mike Edenburn,

“It is my understanding that the religion clauses of the first amendment require that states pursue a course of complete neutrality toward religion,’” he wrote.

In a long chain of emails, it appears there was just a lot of confusion over which events were privately-run (and paid for) by the Humanist groups but included museum staffers… and which events were publicly-run by the museum but gave the impression of promoting Humanist views. The carelessness of these groups didn’t help.

But the more important point is that promoting science — in a museum, no less — isn’t the same thing as promoting atheism. And a museum doesn’t have to give “equal time” to Intelligent Design:

Dave Thomas with New Mexicans for Science and Reason, one of the groups that helped organize the 2014 event, said one of the early flyers put out by NMSR “incorrectly identified the museum as a ‘co-sponsor’ of several talks on religion at the Feb. 12 NMSR meeting.”

In an email, Thomas told KRQE News 13 he believes the Discovery Group wants to be part of Darwin Days so it can “brag about how wonderful it was that their pseudoscience was presented at a prominent public institution.”

Of course that’s what they want. They want any semblance of credibility since they can’t get it legitimately.

Ultimately, to avoid any legal pitfalls, the state officials who oversee the museum decided to cancel the Darwin Day events altogether. That made everyone upset.

[The Department of Cultural Affairs] says they have since changed their policies so staff are diligent to “clearly distinguish State events from private events.”

The Museum didn’t hold a Darwin Days event this year. It’s not what Campbell and Edenburn wanted.

“By cancelling Darwin Day, they have basically said, they will not be giving both sides of the story,” Edenburn said.

There aren’t “both sides” to the story. There’s the side with all the evidence… and there’s the Jesus crowd.

I understand why DCA played it safe and canceling a Darwin Day event isn’t the same as saying evolution is no longer promoted in the museum — it obviously still is — but it’s frustrating that they didn’t take proper precautions beforehand. Those mistakes play right into the hands of the anti-science crowd, and it won’t be long before the ID crowd is declaring victory as a result of the science side’s sloppiness.

(Thanks to Evan for the link)