GOP Congressman, a Leader in the House Science Committee, Admits He Didn’t Vaccinate His Children

He told the crowd that he didn’t bother vaccinating his children (1:26:40) 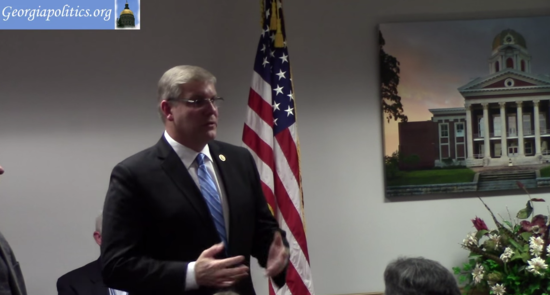 “I believe it’s the parents’ decision whether to immunize or not… Most of our children, we didn’t immunize. They’re healthy.“

Sure, they’re healthy for now. But, as Mother Jones‘ Bryan Schatz points out:

Having “healthy,” unvaccinated kids does not mean that they aren’t at risk, or that they won’t put others at risk later if they become infected. So far this year, there have been 154 cases of measles and three outbreaks; one outbreak sickened 86 people and landed 30 babies in home isolation.  The disease spreads rapidly, afflicting not only those who lack immunization due to parental choice, but also those who haven’t been vaccinated because they are immunocompromised.

What Loudermilk chose to do puts his kids in danger and sets an awful precedent for people who take his views on science seriously. (And why would they? Maybe because he’s a leader in the House Science, Space, and Technology Committee) It’s bad enough that science isn’t taken seriously by the general public. It’s even worse when the people who handle science-related issues in our government don’t give a damn.

February 27, 2015
Launching Today: A Hotline for Those Who Need Someone To Talk To About Their Religious Doubts
Next Post

February 27, 2015 Former Miss Turkey May Do Jailtime For Poetic Instagram Picture That "Insulted" Islamist President Erdogan
Browse Our Archives
What Are Your Thoughts?leave a comment