A different kind of heartbreaking violence:

Ultra-radical Islamist militants in northern Iraq have destroyed a priceless collection of statues and sculptures from the ancient Assyrian era, inflicting what an archaeologist described as incalculable damage to a piece of shared human history.

A video published by Islamic State on Thursday showed men attacking the artifacts, some of them identified as antiquities from the 7th century BC, with sledgehammers and drills, saying they were symbols of idolatry.

“The Prophet ordered us to get rid of statues and relics, and his companions did the same when they conquered countries after him,” an unidentified man said in the video. 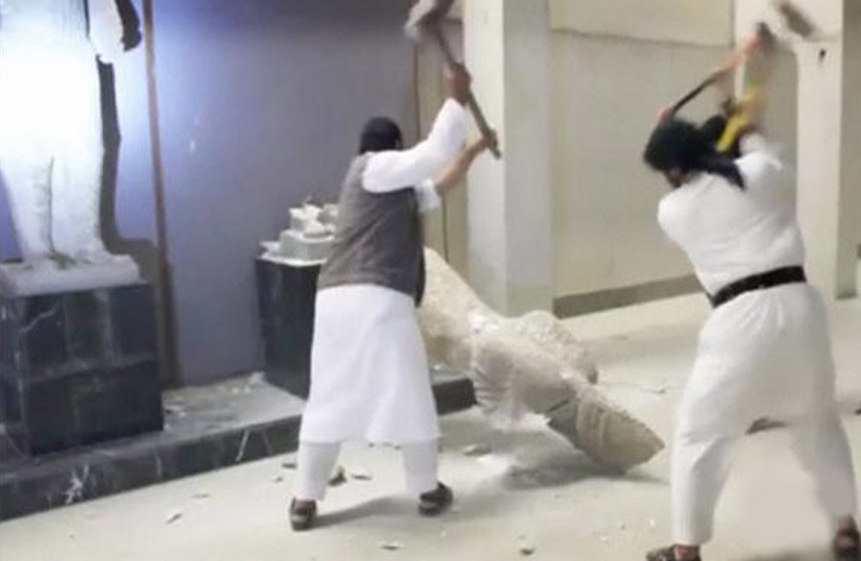 The smashed articles appeared to come from an antiquities museum in Mosul, the northern city which was overrun by Islamic State last June, a former employee at the museum told Reuters. …

Lamia al-Gailani, an Iraqi archaeologist and associate fellow at the London-based Institute of Archaeology, said the militants had wreaked untold damage. “It’s not only Iraq’s heritage: it’s the whole world’s,” she said. “They are priceless, unique. It’s unbelievable. I don’t want to be Iraqi anymore,” she said, comparing the episode to the dynamiting of the Bamiyan Buddhas by the Afghan Taliban in 2001.

As well as Assyrian statues of winged bulls from the Mesopotamian cities of Nineveh and Nimrud, Gailani said the Islamic State hardliners appeared to have destroyed statues from Hatra, a Hellenistic-Parthian city in northern Iraq dating back around 2,000 years.

The winged bulls featured on Iraq currency since the 1950's are gone forever. pic.twitter.com/IOhn8loOdy

One expert made the horrible news a little more bearable by noting that some of the ruined artifacts were not originals, but modern-day replicas.

The director of UNESCO’s Iraq office, Axel Plathe, would not comment on the content of the video, saying it has yet to be verified. But he described the damage to Iraq’s heritage since Islamic State overran Mosul last year as an attempt “to destroy the identity of an entire people.”

I’m surprised by how much watching that video affects me. It’s a sucker punch to the gut — I’m actually feeling sick and dizzy. Surely it should feel worse when people are being destroyed. But this — this hits just as hard. The already tenuous connection between us and our faraway ancestors fades with each hammer blow. Somehow, ISIS has found a way to kill not just our contemporaries, but to kill our forebears who lived a hundred, two hundred generations ago. It is literally to weep for.

February 26, 2015
Atheist Jamila Bey at CPAC: "Embrace Me. Let Me Vote for GOP Candidates"
Next Post