In recent years, faux monks have become an annoying staple of city life across the USA and beyond. The most aggressive ones grab hold of your arm and try to roll a supercheap bead bracelet onto your wrist. Some press a gold-colored good-luck amulet (made of paper or cardboard) into your hand. Every time, they demand money, and if you don’t cough it up, or if the sum isn’t generous enough to their liking (some want as much as $20), they’ll grab back their tawdry treasures and go looking for an easier mark.

I’ve blogged about them before, but that was based on a New York Times article describing these shysters. Now there’s a fascinating video of a few of the fake monks and nuns in action. The footage aired on KRON4, a San Francisco news station, the other day. 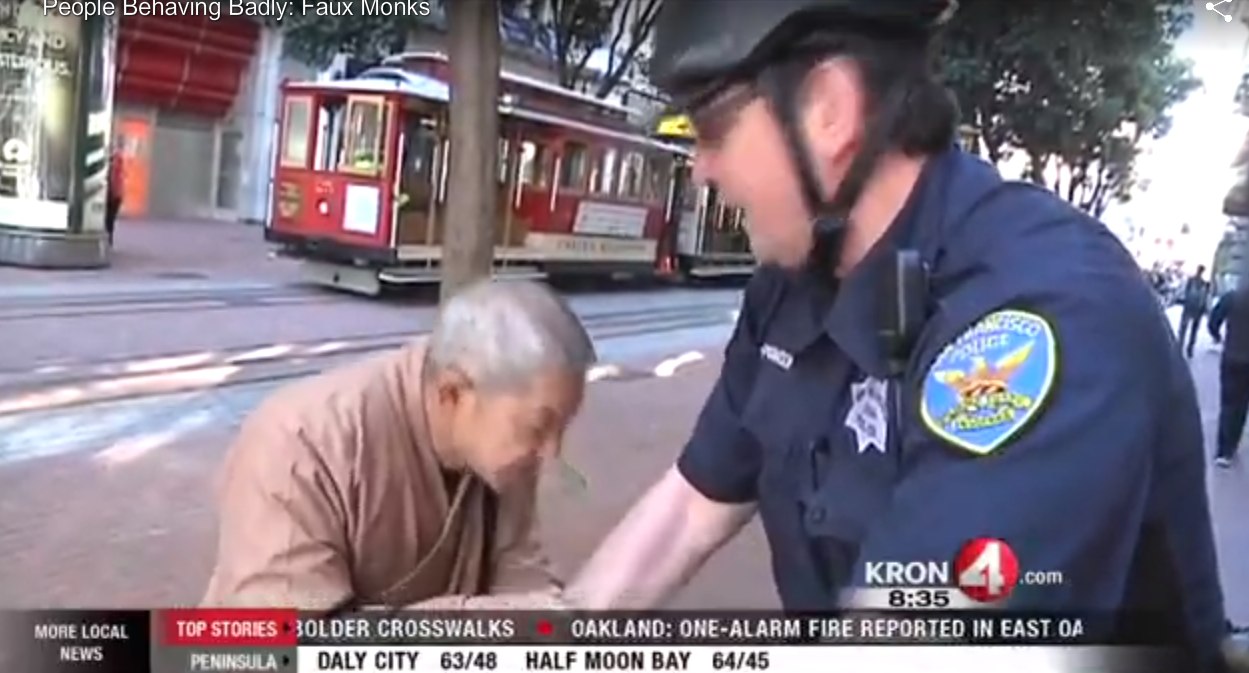 Perhaps the best part is when the “monk” at 3:08 affects a limp to engender sympathy, even though earlier footage had clearly shown him walking rather vigorously without one.

It’s one thing to give money to a panhandler or religious organization (real or fake) of your own free will. It’s another to feel forced into the transaction, especially by a guy who can’t even bother to stay in limpy character for his entire work day.

Exactly. I give as much to good causes as I can afford, but that certainly excludes grabby grifters like these.

“We were told that if we wanted to go to Western countries, then becoming monks or nuns were the better options, because the West is still not so open to Chinese fortune telling or TCM,” said the woman. “The cash collected is shared with the syndicate leaders; the percentage split is done by negotiation.”

The fee she paid got her a grey Taoist nun outfit and materials such as wooden beaded prayer bracelets, amulets and images of Buddha and Kuan Yin (the goddess of mercy) to support her solicitation. The week-long training conducted in her native Zhejiang province included how to size up and approach donors, and knowing when to walk away and when to run. The syndicate helped with immigration and travel arrangements to send candidates overseas.