Christian media is everywhere: TV stations, bookstores, radio shows, etc. But a new survey by LifeWay Research suggests that, for all the money spent trying to spread the Gospel over those mediums, the message doesn’t really break through the Christian bubble: 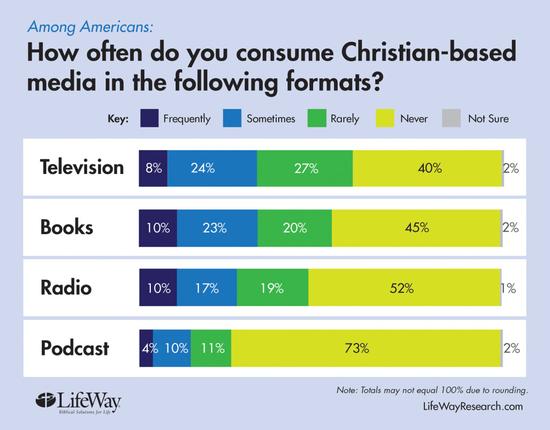 Seven in 10 Americans (72 percent) rarely or never listen to Christian radio. They include those with no religious affiliation (94 percent) or who rarely (84 percent) or never (97 percent) attend church.

Keep in mind that some of us without religion watch or listen to these broadcasts purely for shits and giggles, or because Joel Osteen is so damn cheery and fun, or because we lost the remote and it would take too much energy to change the channel. Point being: Those of us who tune in aren’t all doing so because we feel connected to the message.

They didn’t ask this in the survey, but I wonder how many people have been turned off of Christianity because of these forms of outreach. I mean, Pat Robertson alone is probably responsible for creating a bunch of atheists over the years. Throw in the televangelist scandals and the constant fodder for Right Wing Watch… you almost have to wonder if this media does more harm than good for Christians trying to reach out to non-Christians.

February 26, 2015
One In Four British Muslims Thinks That Attacks on Mohammed Cartoonists and Their Publishers Can Be Justified
Next Post